This spring break, Northern Michigan University students have the opportunity to be adventurous without traveling far by sledding or luging down the icy track at the Lucy Hill Luge Track in Negaunee.

The hill is open to the public on Fridays from 6-8 p.m. and Saturdays from 12-4 p.m. Fridays are referred to as Friday Fun Night, where children ages 18 and under can luge for free. Adults are charged a $10 fee, which includes equipment as well as basic instruction.

Jesse Renfors, president of Upper Peninsula Luge Club, has been luging on the hill since he was eight years old.

“Looking back it’s hard to believe I’ve been coming to this hill for so many years, but I just fell in love with it,” Renfors said. “The track is unique in itself because it is the only natural luge track in the United States.” 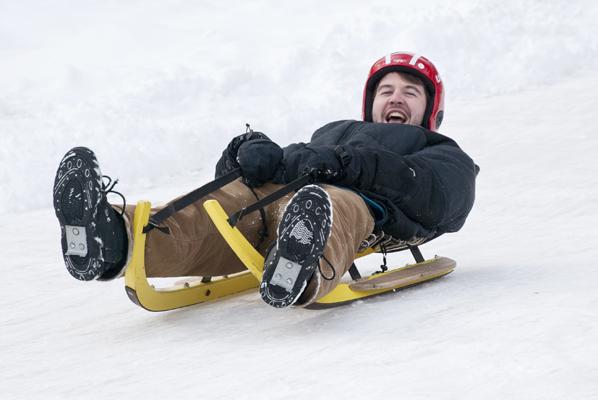 The slopes of the Lucy Hill Luge Run twist down a half-mile long natural slope and includes 29 exciting curves. Unlike artificial tracks, the Lucy Hill track is unrefrigerated and bordered by only snow banks and wooden boards.

“This is the perfect opportunity for students to take advantage of something truly unique and it’s right here in the middle of nowhere,” Renfors said. “The more the merrier; I just want people to use the track.”

Renfors only advice to students is to dress warm since all of the training and equipment is provided.
Joshua Graybiel, a resident of Marquette, went luging for the first time Saturday afternoon.

“At first it was kind of awkward and really took me out of my comfort zone,” Graybiel said. “Jesse gave great instructions which helped me feel more confident.”

Graybiel said the most difficult part was learning how to steer the luge sled, which resembles an old-fashioned wooden sled, by using his feet and body. However, after only a few runs he was able to catch on.

“I was amazed that in one day I progressed in a such short amount of time and was able to move up higher on the hill to gain more speed,” Graybiel said. “It was really fun to go so fast. I felt like a kid again and couldn’t help smiling while going down the hill.”

According to Renfors, the Upper Peninsula Luge Club has accumulated roughly 60 sleds over the years and at one time had between 200 and 300 members.

Unfortunately, over the last 10 years, participation has decreased. Despite the decline in club members, Renfors said he has high hopes for Lucy Luge Hill and would like to appeal to more people, especially the youth.

“It would be great to turn this area into a year-round recreational complex,” Renfors said. “I would like to work with the schools more and become involved with getting kids outdoors.”

The Upper Peninsula Luge Club is always looking for new members at any age. The youngest luger at Lucy Luge Hill was almost two years old while the oldest was in their 80s, Renfors said.

The membership fee for a single is $40 or $75 for a family. Those interested in simply learning about luge or becoming an athlete are encouraged to participate.

For more information and directions, visit the Lucy Luge Hill website at www.negauneeluge.freehomepage.com or call (906) 361-4843.