After a year-long absence from the GLIAC tournament, the NMU women’s basketball team (9-10 GLIAC, 13-14 overall) made their return on Wednesday Feb. 24, losing 76-56 to the top seeded Ashland University Eagles.

Head coach Troy Mattson said he was impressed with the effort his team put forth against the Eagles, who are the No. 4 ranked team in the country. 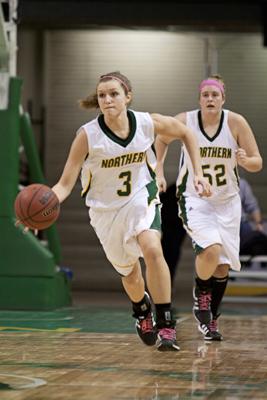 “We played really hard,” Mattson said. “I thought we played with a lot of energy. We were really focused. I thought we defended very well; we held their three top scorers way down below their averages.”

While the ’Cats held the leading scorers in check, the Eagles got a boost from their fourth leading scorer, junior guard Lindsay Tenyak, who went 7-8 from distance and netted 23 points. Mattson said her 3-point baskets ended NMU’s chances of a rally.

“She has the capabilities to shoot; she really went off that night. They weren’t easy shots either; she just made them,” Mattson said. “Every time we started to make a comeback she would come up with a big three.”

The ’Cats were lead by senior guard Chelsea Lyons, who poured in a game-high 29 points, including 19 in the first half. Freshman guard Alyssa Colla also netted eight points and freshman center Courtney Lemon chipped in another seven points.

It was the last game as a Wildcat for seniors Lyons, guard Hillary Bowling and forward Staci Beckel. Colla said the seniors were a big part of her transition from high school to college.

“The seniors were huge leaders all year, they really helped all of us freshmen adjust when we first got here,” Colla said. “I really looked up to them and they seemed to always know what to say, both vocally and by action; they were great leaders.”

Mattson had high praises of his seniors’ for their on-court play as well as their off-court character.

“They’re good people and their going to leave here and be good people out in this world,” Mattson said. “Chelsea had an absolutely incredible senior year. Hillary’s kind of our emotional and vocal leader; if you were an employer you would want to hire her; she’s going to give you everything she’s got.”

With a big chunk of the Wildcats scorers graduating, Mattson said other players are going to have to step in to fill the void left by the senior backcourt duo.

The ’Cats returning starters were all freshmen and sophomores this season. Mattson said the biggest jump in ability often comes in those years.

“I think the biggest learning curve for college athletes is between their freshmen and sophomore year and between their sophomore and junior,” Mattson said. “I expect these girls to make a big leap here; we’re going to get some extra time to spend with them now until the end of school.”

One of those players is Courtney Lemon, who started 25 of 27 games and averaged 7.6 points per game in her first year. Lemon said she is looking forward to next season.

“There are some big shoes to fill on the team now and we’re all going to have to step up,” Lemon said.

The Wildcats finished the season third in the GLIAC North. Lyons success on the court earned her selections on the All-GLIAC First Team and GLIAC All-Defensive Team.

Lyons and freshman forward Brooke Coenen were named to the All-GLIAC Academic Team for their success in the classroom.