Part of the Northern Michigan track and field team traveled to California on Friday and Saturday to compete at the Aztec Invitational, breaking four school records.

The ’Cats left San Diego State University with seven top 10 finishes, although Saturday’s events were cancelled early due to inclement weather. Head coach Tom Barnes said while the weather was unpredictable, the team was in peak condition from the indoor season. 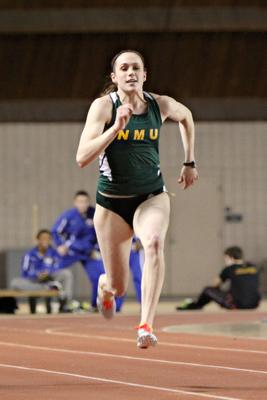 “We put all of our chips on the table,” Barnes said. “For us to be ranked nationally, we have to send people to Nationals. We tried to go for a qualifying mark right away, and they all stepped up. Our purpose was served.”

Junior Mallory Celaya ran in the 3,000-meter steeplechase, finishing sixth place and setting a school record with a time of 11:12.86. Celaya is ranked No. 6 in the country in the steeplechase. Celaya said she was happy to run in her home state, being a native of California, and predicted more success for the team in the future.

“I love racing the Steeple more than any other race,” Celaya said. “Although I didn’t run the time I was aiming for, I’m glad I was able to break the record. Keep an eye out, because more records are going to be broken this year.”

At the pole vault, sophomore Jaime Roberts jumped 11 feet, 8.5 inches to finish in a tie for 12th. Roberts is ranked fourth in the country in pole vault.

Senior Bailey Franklin broke a school record in the high jump with a height of 5 feet, 8.75 inches and is currently ranked first in the nation in the event. Franklin also appeared in the triple jump with a fifth place finish. Although competing in California was a new experience for the ’Cats, Franklin said the team was not too worried about the results of this meet.

“Being in California was just icing on the cake,” Franklin said. “I came to this meet wanting to get 1.75 meters or higher, and that is what I did. I’ve never been in California, and to get a new outdoor personal record here was really fun and exciting for me.”

Senior Melissa Christensen finished in the top 10 in the heptathlon. Christensen said the places scored over the weekend opened doors for her and the rest of the team.

“It was a good start to the season, but left a lot of room for improvement,” Christensen said. “It was disappointing not reaching the score I wanted, but at least I know now where I need to improve and can work on those events.”

NMU placed in the top 10 again on Saturday, finishing ninth in the 4×100-meter dash with Christensen, Hewett, Angeli and Howard all running in the event.

Christensen said the excitement for the outdoor season was still felt by the team although the weather cut short Saturday’s events and everyone enjoyed travelling to California.

“Competing outdoors again was amazing,” Christensen said. “It’s my favorite, even with the weather being uncontrollable. Being in California was a new experience I am very thankful for.”

The next meet for the ’Cats will be on Saturday, March 31 at the University of Wisconsin-Oshkosh Invitational in Oshkosh, Wis.

“Some people might think going to California was a vacation,” Barnes said. “It was a lot of hard work. I want to thank assistant coach Kevin Kean for doing a good job at getting all of the athletes prepared. Everyone performed well, and, once again our purpose was served.”