The heat wave last week caused many people inside buildings to suffer under the hot conditions.

Students took advantage of the warm weather, partaking in many activities that they have been unable to do for months. However, it was not as enjoyable to be sitting inside a building where the heat was rising.

Due to the high temperatures recorded last week, Plant Operations was faced with having to operate the system early in order to combat the warm weather.

“Normal AC startup date is late April, and after the steam plant annual shutdown on the first weekend of May, for AC systems that depend on steam to operate,” Alasimi said. “The low outdoor temperatures need to remain above freezing, which typically does not happen until the end of April.” 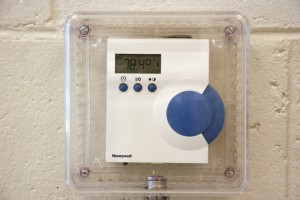 Sitting inside a hot building became taxing for many, who were reluctant to remain inside with uncomfortably-elevated temperatures.

Both students and faculty found ways to relieve the unpleasant conditions when stuck inside a building.

“At one point I glanced over at the thermostat in my classroom at TFA and it read 83 degrees,” said Joshua Garnett, junior public relations major. “It was difficult to concentrate since it was balmy, but it was not oppressive.”

With the varying age of buildings on campus, some AC systems are more efficient than others. As some NMU systems are 30 years old, some buildings require a longer time to reach operational status.

“Depending on the system, some are available to operate automatically if required with minimal work [necessary], while others require extensive amount of work,” Alasimi said. “Cooling towers, chemical treatment equipment and pumps need to be brought online while some systems need to be filled with water to make them operational.“

Despite the apparent rising temperatures, it is not as simple as turning on the AC. Plant Operations makes its decision based on the amount of time the hot weather remains versus the amount of time it would take to make the AC systems operational.

If the temperature is expected to lower before the AC can become fully operational, then Plant Operations will not activate the cooling systems.

“A problem that may develop, especially if temperatures fall below freezing in the near future, is the possibility of the water freezing inside the system,” Alasimi said. “This would require the systems to be put back to pre-operational status in order to prevent extensive damage to the equipment.”

Prior to the activation of the AC, air-handling systems would bring in the outside air during the nighttime, but temperatures had failed to fall to a sufficient level in order to cool buildings effectively.

Students and faculty had to find other ways to diminish the effect of the warmness.

“Some of my professors let our classes out early,” Garnett said. “In the MERC office, there were fans brought up from the basement.

“Monday and Tuesday were the worst days and as the temperature slowly began to lower, by Wednesday it got a bit better.”