The speedskating team finished up their season at the American Cup Final in Green Bay, Wis. the weekend of March 16 through 18.

The team walked away from the meet with several first-place finishes.

Assistant coach Dan Fiorenza said the season was an overall success; the team made great strides in their skating and it was a wholesome season overall.

“It was good, the whole team made a lot of improvements, almost all the guys broke all their personal bests in lap times,” Fiorenza said. “Almost everyone did their best; times came down tremendously this season.” 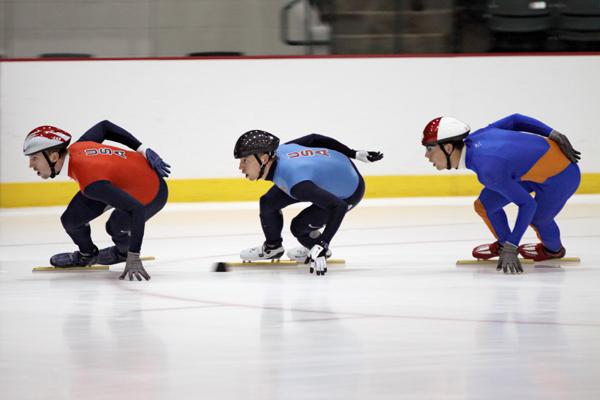 Alaina Fiorenza said she thought the team did very well this season. The team has been training since mid-May, and has been working hard on skating along with schoolwork.

“I think that our placements at competitions shows just how hard we worked this season,” Fiorenza said. “That’s one of the best feelings you can get as an athlete, to know that you gave everything you had and to have a great competition or race that makes it all worth it.”

As far as her own personal performance goes this season, Fiorenza said she is fairly satisfied with the outcome.

“Sometimes you have races that just don’t go well or you get tough breaks but I definitely had many performances that I am pleased with this season,” Fiorenza said.

At the Junior Trials, Perry took sixth place, and at Senior Trials, Alana Fiorenza, Burg, Derrick and Schiel all made the cut. Derrick also made the Junior World Team and won the American Cup Final.

Dan Fiorenza said the team should feel really good about their performances.

“They skated great this season, a lot of them learned a lot and continued to get better,” Fiorenza said. “They trained really hard this summer and it showed through the season.”

Although the next Winter Olympics will not take place until 2014, Fiorenza says he believes the majority of the team has the potential to make the trial rounds.

“I am almost positive that the whole team could make it to the trials but it is uncertain who will make the cut,” Fiorenza said.

Fiorenza said Creveling, Winslow, Perry and sophomore Jordan Malone will all be at the trials and should make the cut off for the top 16.