’Cats set up for success 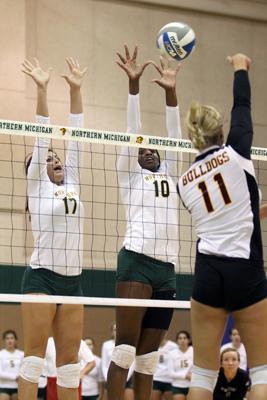 Spring has brought new life into the NMU women’s volleyball team as they continued to roll in their third competition in three weeks.

Their latest stop was in Duluth, Minn., where they captured another pair of victories.

The first opponent of the day was the University of Minnesota-Duluth. The ’Cats dropped three close matches, 25-22, 25-20 and 19-17. Junior left side hitter Andree Ring said the team’s effort was encouraging in the close match.

“We kept fighting the whole time,” Ring said. “There were a few little mistakes that we made but we kept on pushing all the way through.”

Head coach Dominic Yoder said he was impressed with the team’s performance against Duluth, but noted the need for some improvements.

“One of the things we didn’t do well against Duluth was block,” Yoder said. “Their left side really went to town on us and was scoring a lot of points. She made adjustments, we didn’t make adjustments.”

The ’Cats next match was against the University of Minnesota-Crookston and there appeared to be a bit of continuation from the previous match, as they dropped the first game, 25-20.

“(We were) sloppy at the beginning; we allowed them to score quite a few points,” Yoder said. “But in the second set we came back and really dominated and in the third set we took control and were able to win the match.”

The ’Cats took the second match, 25-17, and were able to snag the third one, 15-12, to win the best of three series, 2-1. Pacing the ’Cats was Lopes, who recorded eight kills. Hoffman chipped in 17 assists and 12 digs, while Ring and sophomore left side hitter Kalli Herron each added five kills.

In the final match of the day, NMU got an early look at rival Michigan Tech, who is under the direction of first-year head coach Matt Jennings. Yoder said he adds a positive element to their team.

“The new coach is enthusiastic and energetic,” Yoder said. “I see the program going in the right direction. The new coach coming in is bringing in new life, new blood to the system, and I think he’s going to do a nice job.”

A new coach wasn’t enough for the Huskies to top the Wildcats as NMU swept Tech, 25-9, 25-20 and 15-11. Middle hitter Danielle Kowalski said she was surprised how the team jumped out so early.

“We were actually shocked,” Kowalski said. “They’re beatable, but it’s usually a competition and we just came out there knowing that we were going to win, but we won respect.”

Kowalski led NMU in the match with two solo blocks and two block assists. Ring contributed 11 kills and Zimmerman held down the defense with 14 digs. Hoffman added 22 assists for the ’Cats.

Yoder said there are still areas to improve in, especially the blocking and serving aspects, but he likes where the team is at and expects next years juniors to step up.

“Lina Lopes is going to be really strong going into next year and Kalli Herron is really turned the corner in her performance,” Yoder said. “I think this team, with our recruits coming in, is going to be a team to reckon with in the conference, as well as the region.”

The ’Cats next match is on Saturday, April 14 in the Vandament Arena and it’s going to give them a different look. Instead of the regular six player teams, the competition will be a four-on-four match, a formation that Yoder thinks will challenge the squad.

“I think understanding how to play the game from different levels is going to help them be better teammates and better players when it comes to six-on-six,” Yoder said.