NMU is currently in the process of negotiating new contracts with UAW, a union present on campus.

Several unions including the UAW are up for contract renewal, starting the negotiation process between the school and the different unions.

This process is to ensure the needs of both the employees on campus and the university are met through the newly agreed- upon contracts. 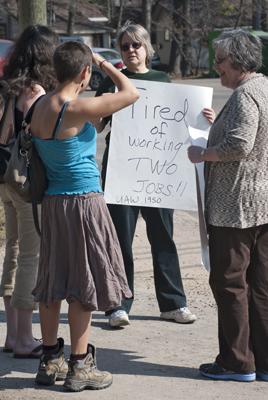 “Our goal is to represent the technical office professionals on campus and to assure that equity for all employees continues,” said Michelle Kimball, president of UAW Local 1950.

The UAW has scheduled negotiations with the administration for the week of April 17.

According to Kimball, several contract articles have already been settled, but issues still remain.

“Right now, our goal is to negotiate a contract that provides a living wage and health care insurance to all UAW Local 1950 employees,” Kimball said.

The current issue for the Local UAW comes from the proposed change in health insurance in the university.

According to Kimball, the change from Blue Cross to Blue Cross 2 insurance would cost employees about $2,400 a year versus about $680 that was paid last year for the old insurance plan.

“Many full-time UAW Local 1950 employees gross less than $20,000 a year; $2,400 for health insurance is simply too costly for them, leaving the lowest paid employees on campus with little choice but to opt out of insurance.”

The negotiation process can be handled one of two ways.

The traditional type of negotiation includes the union submitting a paper proposal that outlines the changes they would like to happen to the current contact.

The administration then will review the proposal and then counter by addressing each of the changes. The process will continue until each side is satisfied with the new proposal.

The second type of negotiation is interest-based. Each side gives a list of their issues with the contract in place and they work together to come up with solutions.

In each type of negotiation, the final proposal must be approved by the NMU Board of Trustees, according to Kimball.

“Having unions allows administration to negotiate with each union to provide contract language for each employee in that union,” Kimball said. “The contract provides for expected levels of professionalism and spells out acceptable work behavior.”

Unions like the UAW are in place at Northern to help both the employees and the administration.

They establish guidelines that prevent unfair treatment from supervisors, ensuring that discipline stems from contract violation only.

They also help the university by speaking for the employees as a whole instead of the university having to negotiate with each individual employee, Kimball said.

The UAW has been in cooperation with Northern since their first contract was established in 1972.