President asks to be held accountable 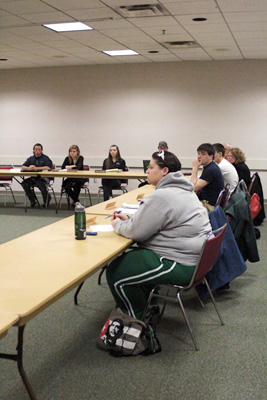 Associated Students of Northern Michigan University’s president Ben Stanley was officially sworn in on Monday, April 18 by a member of the All-Student Judiciary.

The ceremony came after Stanley was released from jail on Friday, April 13, when the judge granted him leniency. On Monday, April 9, Stanley was sentenced to 10 days in jail for contempt of court but was released after five. When he found out that his story was covered in the media, he was very discouraged, Stanley said.

“But I’ve had a lot of discussions with a lot of people and they really got me to see it in a positive light. Which I think has been really beneficial to helping us (ASNMU) have a great year,” Stanley said. “We got our name out there. Everybody knows who ASNMU is now.”

Stanley said he wants to build off the situation and keep ASNMU in everyone’s mind by keeping the momentum up.

“We got the bike-share program started, we got a few other things we’re working on and I think that if we can impress people, I think that it will be a good thing,” Stanley said.

Stanley said he learned a lesson from the whole experience.

“I am representing a large number of people, and it doesn’t matter how I feel, it matters how I’m representing them,” Stanley said.

Stanley called for a meeting at 8 p.m. on Tuesday, April 17 before the scheduled ASNMU meeting to make a formal apology to the members.

“It was not very welcoming,” Stanley said. “I apparently have lost their (ASNMU’s) trust. I’m going to have to do something to prove to them that I am an extraordinary leader.”

Kelsey Hayes, ASNMU vice president, said in the meeting Stanley brought up that everyone now knows about ASNMU and whether it was negative or not, it’s a good thing.

“I can’t speak for the board, but I can speak for myself that I am disappointed with how he handled the situation,” Hayes said. “If he knew he was going to be incarcerated, why wouldn’t you give everyone a heads up?”

Hayes said Stanley went on to say how ASNMU could trust him as a leader.

“How can we? If he had let all of this stuff slip in his real life, how can he be a leader for ASNMU, for the students?” Hayes said. “How can he represent us?”

Stanley said he wants students to hold him accountable.

“If I’m a terrible president, like all the rest of them are, impeach me,” Stanley said. “I want students to come to the meeting and say, ‘you’re not representing me.’”

Stanley had a contempt of court hearing on Monday, April 9 about charges stemming from a chicken-at-large violation issued in September 2011 where he was sentenced to 10 days in jail.

On Friday, April 13, Stanley was brought back into court for two more contempt of court hearings where he plead guilty to all charges. He was then given leniency and released from jail.

On the TV6 website, Marquette Mayor John Kivela posted “This story continues to get misrepresented. First of all, you don’t get jail time for chickens in the city. This guy has let his chicken run around his neighborhood for a long time. Multiple times the police have responded to neighbors complaints, caught and returned the bird to the owner. They finally said ‘next time its running in other peoples yards you’ll get a ticket.’ … so he gets a ticket then fails to appear. Then gets caught driving without insurance or registration, and finally hauled in front of Judge Kangas. It was his actions in the courtroom, running his mouth and being disruptive, that so infuriated the Judge enough to throw him in jail on CONTEMPT, NOT CHICKENS. This is about someone who has no respect for rules, laws, his neighbors or apparently the judge.”

The last ASNMU meeting of the semester will be held at 8:30 p.m. on Tuesday, April 24 in the University Center.