The Northern Michigan club lacrosse team travelled to Blaine, Minn. on Sunday to compete against Bethel University, finishing a close game with a loss of 10-6.

The Wildcats played hard against the Royals throughout the game, despite being undermanned 13 players to Bethel’s 17. The game also marked the final game of the season for the ’Cats, with the team switching over to the Great Lake Lacrosse League (GLLL) next semester.

Coach Kevin Sande said, although the team did not win against Bethel, the team played hard and remained strong to move in the right direction. 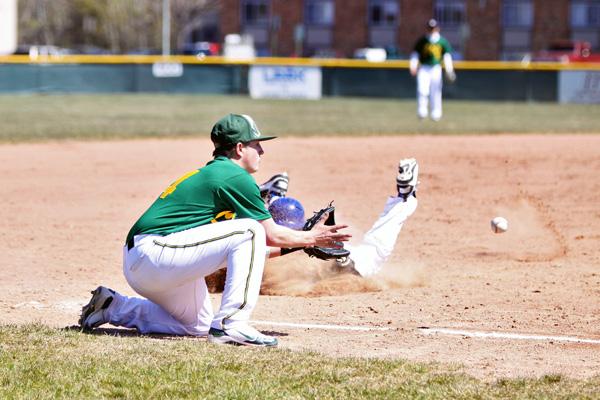 “Everyone gave 100 percent,” Sande said. “It was a really fun game to watch and be a part of because I was able to see the progression of our skills and our team work up to the culmination of our season. I’m really proud of all the hard work the team has put in.”

Bethel scored three points in the first quarter of the game, leaving the ’Cats to battle their way back in the second. Sophomore David “The Ape” Katt scored a behind-the-back shot to bring the team to 3-1, with freshman Jack “Possum” Gosselin assisting the goal. The team scored three more goals to finish up the quarter, bringing the ’Cats to a one-point lead.

Sophomore Connor Houlihan, co-captain and midfielder, said the team kept playing hard even with tough rotations on the field.

“Playing against Bethel felt pretty good, and the team put up a good effort,” Houlihan said. “We had to rotate a lot, which exhausted a lot of us, but we just kept moving. We have a lot of good young guys coming up and aiming to be a lot better next year.”

The game continued into the third quarter with steady scoring between the teams, with the ’Cats maintaining a one-point lead throughout. In the fourth quarter, Bethel made a comeback during the final five minutes of the game, pulling ahead by one goal.

Sande said some of the loss was contributed to by exhaustion when the action kept players from consistently using substitutions.

“It was a frustrating loss, but everyone kept playing hard in the end,” Sande said. “When you’re tired you forget mechanics, but the performance was still impressive.”

The ’Cats are planning to switch from the Men’s Collegiate Lacrosse Association to the GLLL next year, changing the team’s scheduling and opponents.

Junior Kingsley Agassi said the team, while learning lessons over the course of this season, is looking forward to the changes.

“Looking back over the season, everyone stepped up,” Agassi said. “It’s all about the camaraderie, and everyone always played their hearts out. The changing weeks and teams next year are really exciting things for the team, seeing as we will not be facing teams who will be getting scholarships and consistently recruiting.”

Moving over to the GLLL conference, NMU will face teams from Minnesota, Wisconsin and Illinois, expanding the team’s exposure to other universities. Sande said another change for the team will be the amount of veterans that will be returning.

Sande will be graduating from Northern Michigan University at the end of this semester, along with senior Connor Garrity. Sande said his last semester with the team seemed to go by faster than the previous years.

“The team showed a lot of heart, especially in the last four weeks of the season,” Sande said. “We all put in a lot of work, but sometimes it doesn’t coincide with the win category. They always show a lot of heart.”