Checker Bus given contract for NMU 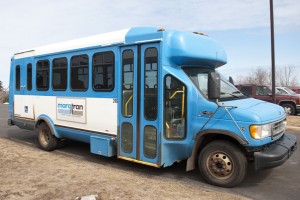 Starting this fall, NMU students will be able to use the new Checker Buses on campus instead of the Marq-Tran shuttles.

A new contract has been affirmed between Northern and Checker Buses.

The company has previously worked with NMU, providing transportation for the various sporting teams, but they will be the primary source of transportation around campus starting this fall.

“We’re going to be doing the exact same thing that Marq-Tran did,” said Jesse Schramm, owner of Checker Buses.

Checker Buses will take the place of Marq-Tran on the usual route through campus. Two new buses were purchased to take students from the LRC to both the PEIF and the Jacobetti Center.

The buses will run on the same schedule used previously by Marq-Tran; the only change will be the addition of a route on Fridays that will take students to the various shopping areas of Marquette, Schramm said.

According to Mike Richer, operations supervisor at Marq-Tran, the change in contracts came as a surprise to the company.

“We’re trying to work on our second contract with Northern,” Richer said. “We hope to regain the contract that we lost.”

Marq-Tran will still be working with Northern on another contract for off-campus transportation.

They will continue making their routes throughout Marquette County and provide local students with a way to get to campus.

The service will remain free to students with I.D. and the routes should stay the same, said Art Gischia, associate vice president of Business and Auxiliary Services.

According to Gischia, students should not experience a change in the service except for the additional route added by Checker Buses on Fridays.

As before, there will be no charge to students for using the transportation system so long as they show their student I.D.

“We haven’t had the luxury of another provider in the marketplace,” Gischia said.

On-campus transportation began with Marq-Tran in the fall of 2005 with the start of the academic year.

Although there have been other companies in the area, none of them had met the requirements set in place by NMU besides Marq-Tran until Checker Buses.

The university requires that their contract-holder provide a bus of the correct size, one that is wheelchair accessible, as well as qualified drivers that are first aid certified.

They will use different technologies that will track how many students are using the service.

“There’s a lot of things we can do if Northern wants it,” LaValley said.

Although the cost difference was a factor in the decision to make the change, the service provided for students remains a top priority, Gischia said.

Checker Buses is a local company owned and operated by NMU alumni. Both Schramm and LaValley are NMU graduates.