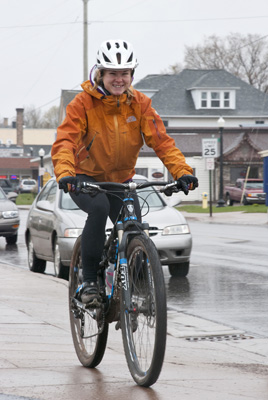 With the weather warming up, students want to spend time outside with friends before they have to go back home for the summer.

Now that students have their bicycles back from Spooner’s basement, it is important to know the laws. The City of Marquette offers a variety of bicycle-related facts.

Marquette provides more than 16 miles of multiple-use paths around town that lead to parks across the city. Because the paths are multi-use, cyclists share the paths with walkers, runners, roller bladers and skateboarders.

Since the paths are used by other people, it is required by the Motor Vehicle Code to announce when a cyclist encounters others by indicating the number of riders and advising them which side it will be passing on. An example of this would be, “One to the left.”

If the cyclist rides faster, it is suggested they use the roadways.

“With gas prices rising around town, more and more people are commuting on bikes and it’s important to abide by the same rules vehicles have to on the roadways,” said Sergeant Ryan Grim from the Marquette Police Department.

In Marquette, there are bike lanes on Wright Street from Presque Isle Avenue to Ontario Street.

If there is no bike lane, the State of Michigan requires riders to ride on the far right side of the road closest to the curb.

The Marquette Police Department also says that bicyclists must ride in the same direction as traffic, and they must obey all traffic control devices.

“A problem bicyclists have around Marquette is abiding by stop signs,” Grim said. “You must stop at stop signs, especially with the increase of bicycles sharing the roadways.”

Bicyclists are not allowed to ride on limited-access highways, like US-41/M-28.

Also, when riding a bike after dark, it must be equipped with a white front light and a red reflector or red light in the back.

“It is important to wear bright and reflective clothing when riding a bike at the times of the day when lighting makes it hard to see,” Grim said.

The police department suggests going to the State of Michigan’s web site for more information on the rules of the road.
The city of Marquette has an ordinance prohibiting bicycles and coaster devices from using sidewalks in the business districts during certain hours.

The ordinance reads, “No person shall ride a bicycle, skateboard, roller skates, coaster or similar device on a sidewalk in the City of Marquette in the following business districts, except between the hours of 6 p.m. and 10 p.m., Monday through Saturday, and 10 a.m. to 10 p.m. on Sundays: Washington Street between Lakeshore Boulevard and Seventh Street; Third Street between Fair Avenue and Baraga Avenue; Front Street from West Ridge Street to West Baraga Avenue.”

The Marquette Police Department also provides some facts that prove wearing a helmet can save one’s life. Bicycle helmets are not yet required by law to be worn.

Six hundred and ninety-eight bicyclists reportedly died on U.S. roads in 2007, and two thirds of deaths are from traumatic brain injury, according to www.mqtcty.org.

About 540,000 bicyclists visit emergency rooms with injuries every year, and one in eight of the cyclists with reported injuries suffered a brain injury.

“I choose to wear a helmet every where I go because it protects my brain from concussions and permanent damage,” said Matt Bloch, sophomore business management major. “I actually got a concussion when I was wearing a helmet and the doctor said if I wasn’t wearing a helmet, I would have died from the force.”

The Marquette Police Department also shares that the direct cost of cyclists’ injuries due to not using helmets are estimated at $81 million each year, rising with healthcare costs.

“As helmets get more expensive, they could come in different sizes which increases overall fit and protection,” Bloch said. “Any bike shop in Marquette will sell them.”

The police department encourages everyone to wear a helmet.

“Wear a helmet and use your noggin’,” said Josh Maxwell, a sophomore psychology major. “If you go to any bike store, they will be able to help you find one that fits snug and doesn’t make you look like a dweeb at the same time.”

The city of Marquette offers the opportunity to learn more about bicycle safety this summer.

The Marquette City Police Department will be hosting a bicycle rodeo, where children and young adults can practice riding, learn about bicycle safety and also get their helmet checked for proper fitting.

This is also an opportunity to register your bicycle if it has not already been done, free of charge. This year’s Bike Rodeo will be held from 4 to 7 p.m. on Friday, June 29 at the Marquette Commons.

For more information on bicycle safety and laws, visit the wwww.mqtcty.org or www.m-bike.org.