Leading up to the meet, NMU head coach Tom Barnes said the event would be one of the larger meets of the season.

“A lot of the athletes will be hitting their peaks around the time of that meet,” Barnes said. “There will definitely be a lot of great performances and even more competition.”

The ’Cats started making top-10 appearances early when senior Catherine Angeli placed seventh out of 42 athletes in the 100-meter dash.

In the 400-meter hurdles, junior Colby West placed 16th to give NMU another top-20 finish.

NMU took first place in the 3000-meter steeplechase when junior Mallory Celaya broke a new school record, running a time of 10:59.14. Celaya said the atmosphere at the meet was a big help for everyone competing.

“The sun was shining and it was a great day to run,” Celaya said. “I’m glad to represent the school, and taking first feels like a way to remind people that Northern is a school to contend with.” 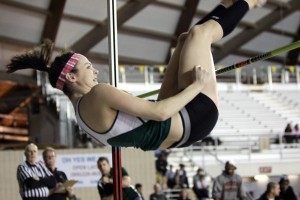 Hewett also had a top-10 finish in the 100-meter hurdles, placing eighth. Hewett said, although the meet was one of the larger competitions, it left her excited for the upcoming conference meet and she was not disappointed.

“It definitely was a fun meet,” Hewett said. “My jump was one of the best jumps that I have had, and it felt like a nice overall performance. Everyone loves the outdoor season, and I can’t wait for conference.” 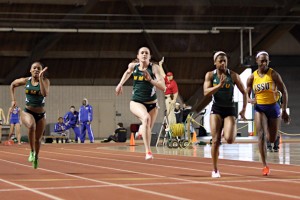 Beaman also placed in the top-15 in the long jump, with sophomore Samara White placing ninth to earn the ’Cats another top-10 victory.

Senior Melissa Christensen earned another victory for NMU in the heptathlon. Christensen also took second place in the long jump, breaking a school record with a jump of 18 feet, 5.25 inches. Christensen said the performance cast a new light on the rest of the season for her.

“Having jumped this distance this weekend has given me a whole new boost of ambition and drive,” Christensen said. “Achieving this goal just inspires me to reach my new goal of hitting a provisional mark.”

Finishing up the day, the 4×100 relay team finished fifth place with a new school record of 47.42 seconds.

Howard, Angeli, White and Hewett all ran in the event. Hewett said the competition during the race made the performance a memorable experience.

“There was some serious competition from other schools,” Hewett said. “We all ran a hard race, and we expect to get even further next time.”

For a select few Wildcats’ the next meet takes them on the road to Philadelphia, Pa. on April 26-28 to compete in the Penn Relays, which will be the largest outdoor track and field competition in the nation.

“We had eight or more girls reach a new personal best, which shows great improvement and great coaching,” Celaya said. “Everyone is peaking at the right time. I’m really proud of my teammates.”