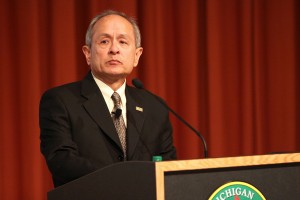 Wong, a native of California, has been the NMU president since 2004. He will be serving as the president of San Francisco State University. He was raised in Oakland, Calif. across the bay from San Francisco.

“The visit by President Obama last year tops the list [of favorite NMU memories],” Wong said. “This is followed by the visit of President Bush in 2004. A visit by one president is pretty special, so I’ve been fortunate to have two.

“I also have fond memories of hockey games, theatre experiences, student artists meeting at Kaye House and having late-night chats with students at the residence halls.”

Wong remains in Marquette and NMU, serving as an adviser to the interim president. He and his wife Phyllis will be departing in the middle of July, and his first day as president at SFSU is Aug. 1.

“The [SFSU] campus is also much larger (35,000 students),” Wong said. “Of course, serving one of the most beautiful cities in America is nice. It also has the largest international student population, so the scale of everything is just larger.

“Like Michigan, we’ll have to guard and protect the mission of the university and provide a high quality student experience in tough budget times.”

Wong has many favorite memories and accomplishments while he served as president. According to Wong, some examples are the sports teams, undergraduate research, student clubs and post-baccalaureate work of the MBA program.

“I look at the student experience as vastly improved,” Wong said. “WNMU-TV and Radio X are stronger than ever and the wireless system is unmatched for a university.”

Despite the optimism of returning to his home state, he is also met with bittersweet feelings as he prepares to leave Marquette.

“Phyllis and I will miss the people and this location in ways that words fail to convey,” Wong said. “This community greeted us warmly and our relationship with everyone on and off campus grew and grew in quality and trust. It will be hard to look in the rearview mirror when we leave Marquette.

“This is a very magical place and we will not forget our friendships, our experiences and our love for the U.P.”

According to Wong, he believes the greatest area of growth was the connection with the local area.

“When I think about the entire eight years, I am most proud of re-establishing excellent relations with the citizens of Marquette and the U.P.,” Wong said. “Community relations needed big-time attention when we started and in no small way, Phyllis was quite instrumental in her role as the First Lady of NMU. NMU’s relationship with the Marquette community is a strong one now.”

Wong said the regional and national reputation of NMU is in a better place due to the strengthened relationship with the local community.

“I try to tell students that you’re always a lifelong learner, always alert to challenge and opportunity,” Wong said. “SFSU provides a clear challenge in the size, scale, mission and location of the university for me.

“Its mission is a commitment to social justice and equity through teaching and research.”

Wong said the cultural diversity of the SFSU campus echoes his own values.

“Phyllis and I have always been open to intellectually challenging experiences, and this fits the bill,” Wong said. “Emotionally and symbolically, I left home 44 years ago to get an education, and I think I’ve earned the opportunity to go home and make a difference.

“We’re wrestling with what that means to both of us. But we leave with intense and mixed emotion.”

David Haynes was chosen as the interim president of NMU after former President Les Wong announced his resignation on May 10.

Haynes was announced as interim president by the NMU Board of Trustees on the same day Wong stepped down.

There was some controversy about how Haynes was named president because there was no vote by the Board. On May 15, the Board held a special meeting and voted 6-2 in favor of Haynes.

“The past 27 years I have been professionally related [with NMU] in various positions,” Haynes said. “Prior to that, I was an alumnus, participating as an active member of alumni. I have served as special adviser to five presidents.”

“I do not have any connection to Steelcase, Inc.,” Haynes said. “I had to resign all that when I took over as president, as required by state rules and regulations that I cannot work for someone else while president.”

Haynes said his consulting firm has ceased all business once he became the interim president. Cloyd was one of the six members who voted in favor of Haynes as interim.

“When we knew President Wong was leaving the university, it was a natural response that we had a conversation of potential people,” Cloyd said. “After the main board meeting, we always have a closed session of the board and had a big discussion of the successor to the president. 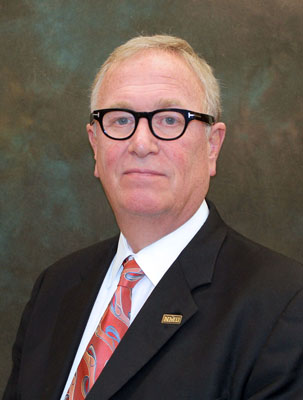 “Haynes was the one, everyone agreed, and seven of us were there to agree he would be the most logical choice.”

The closed session occurred immediately after their board meeting on May 4. According to Cloyd, the search for an interim president only considered people who are a part of NMU as an employee or anyone recently retired. Martha Haynes, the wife of David Haynes, was appointed vice president of advancement on May 4, prior to David Haynes becoming interim president, and she also oversees the NMU Foundation and NMU Alumni Association.

“It’s awkward, but in Martha’s case, the situation was in place beforehand and she reported to President Wong,” Cloyd said. “We were aware in our discussion looking at an interim position but Martha should not be at a disadvantage nor should David since they are married to each other.

“The underlying factor we want is to make this transition as smooth as possible and make sure the operational side of all three associations are not impeded by the relationship.”

Haynes said he was unaware he was being considered for the position of interim president until Wong announced his resignation. He was notified soon after that he had been selected as interim president.

The term Haynes will serve as interim president is two years long. Before his term is over, another search will take place to find a permanent president.

“The Board of Trustees will appoint a search committee and search for a new president, who will be the 15th president,” Haynes said. “I am currently the 14th president. I am not a candidate for the permanent slot and will not be applying, as I want to return to the classroom at the end of my presidency.”

“Running a university is like running a corporation or any significant organization,” Cloyd said. “It needs someone, whether for 30 days or three years, who has the time or dedication to make sure that organization will function as it should.

“I think it would be reckless to have that slot open or try to assign someone already appointed on the Board of Trustees with other responsibilities for whatever short period of time it is.”

According to Haynes, his personal ties to some members of the Board of Trustees date back before his current term as interim president.

“The relationship of chief executive officer or president has to have a working relationship, and friendships develop during that tenure.”

Haynes said he looks forward to serving his alma mater and one thing he loves about NMU is the strength that the university has with working together, being amazed with all facets of the population.

“This is a world-class institution with a world class faculty and administrative staff,” Haynes said. “No matter a secretary, professor, administrator or cook our job is to provide education to students and we have incredible student body.

The Board of Trustees wanted someone who was familiar with the operations and processes of NMU who would also be able to understand the needs of the campus and community, Clody said.

“I think that where we are and what we attempt to do, while apparently controversial, is not dissimilar to what happens to other organizations that this happens to,” Cloyd said. “We need make sure to protect the interests of the organization and any time there’s a vacancy, it opens doors to things happening that are certainly not intended and detrimental or harmful to the organization.