A part of the NMU campus will be experiencing scorching heat as Carey Hall is used for fire training before its demolition.

The idea originated during the initial planning stages of Carey Hall’s demolition. Various departments on campus were involved and it was supported by former President Wong.

The benefits of using Carey Hall for training purposes are that it will help familiarize Marquette firefighters with the layout of campus buildings and also provide realistic training through real-life conditions.

“Most fire service personnel will never have the opportunity to train in a building of this nature and the university is excited to be able to provide our local fire department the opportunity to train in Carey Hall, which is similar to existing buildings on campus,” said Lee Gould, occupational and environmental health specialist. “The Marquette City Fire Department will utilize the entire building for different training activities. Live fire training will only be conducted in the east wing of Carey Hall.”

The training is scheduled to take place in June, with the demolition of Carey Hall planned to occur late June or early July. 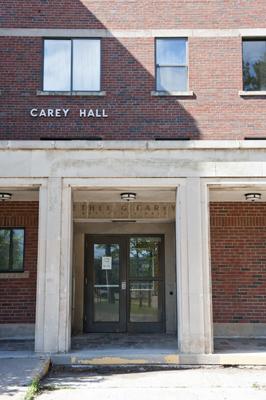 “In the past [firefighters train live] every few years,” said Tom Belt, fire chief. “We acquire local homes that NMU has bought and do limited burns inside structures, every two to three years.”

“The Marquette City Fire Department will have a charged hose line at the training burns should any problems be present,” Gould said. “The Marquette City Fire Department has sealed the corridors with drywall at the start of the east wing to keep smoke from spreading throughout Carey Hall and the attached Lee Hall. All fires will be conducted in a controlled environment by highly trained firefighters and charged hose lines will be at the location of each training burn.”

The fire department normally trains all around town, using the lake to their benefit when it comes to water training. However, there is no replacement for the actual conditions of a fire.

“With a live fire, there is no substitute,” Belt said. “All the conditions in the room like smoke and heat and are few out of a lot of tasks we must perform. Extinguishment and dummies for search and rescue under fire conditions, those are hard to simulate and ideally [we] need a fire burning.”

The training will occur during the day, as part of the multiple safety measures that are put in place.

“Carey Hall is essentially a concrete and brick structure with very limited materials that will actually burn within the building,” Gould said. “The Marquette City Fire Department will be only conducting small burns with fire resistance materials added to the corridors to control smoke and they will have a charged hose line immediately available at the fires to extinguish the fire should any problem occur.”

According to Belt, the fire department is appreciative of the partnership with NMU, claiming that a building such as Carey Hall is a rare opportunity. Despite being made from non-combustible materials, a fire inside the building can still be serious.

“[The exercises are] essentially mostly with basic fire,” Belt said. “Forcible entry, search and rescue, containment and extinguishment, mechanical means through high pressure fans to push smoke out, tactics and strategies [will be practiced].”

Despite the training, there should be minimal to no disruption for other activities on campus and getting around.

“The asbestos has been previously abated in the areas where the training burns will take places,” Gould said. “The sidewalk in front of Carey Hall may be temporally shut down during training activities. However it will reopen as soon as training is completed each day.”