After a two-decade absence, the public can once again set sail along the shores of Marquette with Marquette Harbor Cruises.

With its port and ticket office located in the lower harbor, residents and tourists of Marquette alike can take the narrated cruise on Lake Superior that offers views of the city.

On Friday, May 18, the Isle Royale Queen III set on its maiden voyage for Marquette Harbor Cruises. According to owner Molly Carmody, the cruise runs seven days a week and will continue to operate daily until Oct. 14.

“Two years ago, after the boat was found sitting in a marina in Menominee, a couple of the owners came up with the idea of launching a boat cruise business in Marquette, and we started it along with the owners of the ship,” Carmody said. “[Marquette] had one over 20 years ago but it didn’t keep going as an on-going business.”

The cruise heads north, going in and out of both harbors, along Presque Isle, Middle Bay and goes around Partridge Island before turning around, taking the same route back. 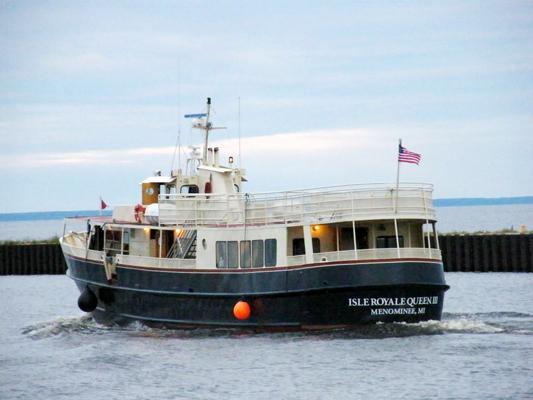 The ride lasts for two hours and some of the topics of the narrated cruise include early Marquette history, the iron ore mines and the interaction between the first missionaries with Native Americans.

“It was really the most logical route to show people the city that they’ve been living in,” Carmody said. “A lot have lived there (in Marquette) all their lives and others their adult life. They go to features on the land and they all know those places but everything takes on a little different perspective when seen a quarter to a half mile out from water.”

Carmody said she considered it a shame that Marquette has gone so long without a cruise, stating the fact that the city and businesses have been working on developing the harbor.

“It was becoming quite a little gem and a shame not to see it from the water,” Carmody said. “The Superior Dome looks bigger out on the water than in the parking lot and when right up next to it on a deck of a boat, you notice how large the ore docks are.

“All along the shoreline (north of the city) are summer homes and cottages that look so adorable from the shoreline.”

The daily cruises are open to the public but Marquette Harbor Cruises also offers private and charter events, as well as group rates. Some events are catered.

“The boat is appropriate for birthdays, family and class reunions, providing the perfect setting for a group of people,” Carmody said. “Special events [include] live music and a group going out for fireworks on the evening of Fourth of July.”

Reservations are recommended but not required. The boat requires a minimum amount of people to depart so it is recommended to contact them if it is early or late in the season, or if there is inclement weather.

Regardless of rain, the ship will sail, lake conditions permitting. The standard fare for an adult is $25 and the youth fare, for ages 14 and younger, is $10.

For information such as schedules, events and a map of the route visit www.marquetteharborcruises.com. Call (855) 868-2628 or email [email protected] with questions.