The Blue Lounge in downtown Marquette wrapped up its inaugural Battle of the Bands last weekend, with 21 local bands competing in the multi-round event.

The battle started on Friday, May 11, and continued over three consecutive weekends, leading up to the finals on Saturday, May 26.

The contest was organized by the Blue Lounge and Double Trouble DJs, who created the event when they saw the need for a local music showcase. 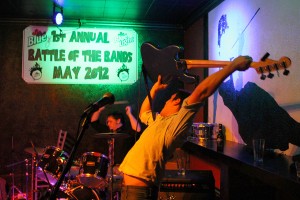 “No one had done it before, and we knew that we could get it done with the amount of talent in the area,” said Patrick Digneit, co-founder of Double Trouble DJs.

A number of NMU students were among the musicians in the competition.

Jonathan Letts, a senior music major, said he was glad to see so many fellow Marquette musicians playing together.

“It was cool to see a collective unit of not only student musicians, but other faces from the community in one spot,” Letts said. “Overall it was just good to see so many people out to support the music scene.”

Digneit and the other organizers for the event were pleasantly surprised with the response from the community.

“People were very excited about it, from day one to the final round,” Digneit said.

In order for a band to win their round, they would have to win the popular vote for the evening and win the vote from a panel of judges.

Voting chips were given out with each drink purchase, which could then be placed in a bucket for each band that was performing that night.

The first round of the competition took place on May 11, with Everything Under the Sun claiming the victory.

The second round of the competition took place the following night, with local hardcore outfit Stitch the Wounds securing a win.

“The turnout was great; lots of people, and other bands, came down to watch,” Digneit said.

The third round of the event took place on May 18 and was won by the Marquette band Midnight Manual, and the fourth round by the Overtones.

In the last round before the finals, the punk-rockers in Skunk Fur secured their chance at the grand prize.

Competing in the finals was a nerve-wracking experience said Brett Hanson, frontman for Everything Under the Sun.

“Every band was on and so talented and humble; the crowd loved every song of every set,” Hanson said. “The variety of music that night was really extraordinary.”

Despite a close number of votes, Everything Under the Sun was victorious in the final round.

“It was really intense,” Hanson said. “We lost our guitarists’ pedals and my wireless microphone kept cutting out.”

Despite the technical difficulties, the band won $1,000 and a free demo with Cameron Studios.

“It was an awesome experience, and we’re very excited to record and to perform on a regular basis throughout Marquette,” Hanson said.

Both Hanson and Digneit agreed the greatest reward from the experience was the support between the local musicians.

“There’s an incredible amount of talent in the Upper Peninsula,” Hanson said. “It truly was powerful to see everyone come together, support each other and watch some talented bands. There are good things to come for Marquette’s music scene.”

The Blue Lounge and Double Trouble DJs are planning on hosting the second annual Battle of the Bands next year.

“The turnout was great, but the support between bands was the nicest part,” Digneit said. “This is definitely going to be an annual thing; we’ll be back next May.”