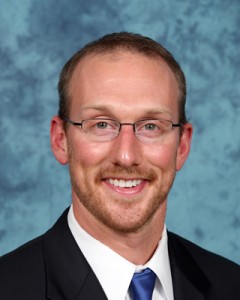 The four-month search came to an end on Wednesday, May 30 as Forrest Karr was named NMU’s new director of athletics.

NMU president David Haynes made the announcement in the Wildcat Room in front of NMU coaches and various media outlets. In a press release, Haynes said Karr’s experience and athletic insight made him the best fit.

“Forrest Karr is a great fit to be NMU’s athletic director,” Haynes said. “He comes into the position with outstanding leadership and management skills. He understands both NCAA Division I hockey and Division II intercollegiate programs.”

Karr, who graduated from the University of Notre Dame with a bachelor in business administration, also played goalie for the Fighting Irish and was named the team’s MVP in his senior season.

Karr went on to receive his law degree from the University of Wisconsin before spending eight years as director of athletics at University of Alaska-Fairbanks.

During the press conference, Karr was connected via Skype to accept the position, speak on his hire and answer questions. Karr acknowledged there is a lot to do, but one of his first matters will be getting the schedule filled for the 2013 season.

“One thing that I’m going to work hard on right away is to get a final football game in place for the fall 2013 season,” Karr said. “The conference games take up everything but one game, so the first weekend of the year we need to bring an opponent into Marquette and preferably a Division II opponent.”

The University of Alaska-Fairbanks has 10 varsity sports, eight of which NMU also features. Karr has worked with NMU hockey in the past, as both teams are a part of the CCHA conference.

“In our work together over the years in the CCHA, I find that we’ve been fighting on the same sides of many issues, so I feel like I’ve really been working along side Northern Michigan and working in some ways on Northern Michigan’s behalf,” Karr said.

During his tenure as director of athletics at UAF, the Nanooks captured three team and three individual NCAA titles. The school also set an NCAA attendance record as host of the 2007 NCAA Rifle Championships. The hockey team made its first NCAA Division I appearance in 2010.

In 2011, the Nanook women’s cross-country team competed in it’s first NCAA DII championships. The school also established a women’s swimming program under his direction. In a press release, Karr spoke fondly of his time at UAF.

“I’m grateful to my friends, co-workers and the many Nanook supporters who have made the last eight years in Fairbanks so memorable,” Karr said. “While Alaska is a remarkable place, and it’s difficult to leave people I love working with, moving on to a new position and another great community closer to family is very exciting.”

The search for a new candidate officially began on Jan. 19, 2012 as Ken Godfrey resigned due to health issues and interim athletic director Steve Reed announced he wasn’t applying to becoming the full-time athletic director.

The long wait appeared to be coming to a close as former NMU President Les Wong made his recommendation to the NMU Board of Trustees on May 4, 2012. Just four days later, it was announced that Wong accepted the president’s job at San Francisco State University.

The athletic director search was then handed off to Haynes. On May 11, Karr and Sean Johnson both inform NMU they are still interested in the position.

Karr said he is excited to work with a bigger athletic program and thinks the combination of coaches and athletic tradition at NMU provides excellent potential.

“My goal is to be a perennial top 20 team in the Learfield Sports Directors’ Cup standings and in order to do that we need to have a number of programs that are successful,” Karr said. “There are a number of programs that are already successful at Northern and we’re going to work to make the other ones successful and I just think all the tools are in place and all the people are in place.”

Karr said the administrators and coaches will make the transition easier.