At the 2012 Olympic Team Trials in April, senior Tanner Andrews was awarded the coveted Jacob Curby Memorial Award. The award is presented in honor of Jacob Curby, a Greco-Roman Team USA member, and a USOEC alumni, who unexpectedly passed away in 2010.

The winners of this award exemplify the personal traits and characteristics which Curby displayed throughout his remarkable life.

“Jake was from Illinois just like me; he was my coach, my teammate, and always someone I looked up to,” Andrews said. “He was the kind of guy you wanted to be like because he pushed you more than anyone else in the mat room and showed more class than anyone I’d ever met.”

Senior Ryan Hope, also a wrestler from Illinois, said it meant a lot to see this year’s award go to someone so close to Curby.

“Jake was from Illinois, and graduated from NMU/USOEC, and had a hand in coaching the Illinois boys at some point in time in addition to being a great teammate,” Hope said. “Not to take credit away from the other athletes nominated, but it’s nice to see someone so close to home, like Tanner, be awarded the Jacob Curby Memorial Award.”

Andrews said that receiving the award meant more to him than any other he had received in the past.

“I felt like that was my best award I’d ever achieved despite winning all the medals and tournaments I have,” Andrews said. “Winning the Curby Award was very motivating because it showed me that I’ve actually improved. It’s always hard seeing that you yourself have improved and that award put it into perspective for me that I can do it.”

After moving up a weight class, one of the harder moves to make in his sport Andrews said, he placed top six at Olympic Trials.

“It is upsetting because I lost to someone I’d beaten before that ended up getting third at Trials,” Andrews said. “The experience is something I’ve learned a lot from and the next Olympic run will be better.”

Coming from a family three generations deep in wrestling, its no wonder why Andrews has been wrestling for 16 years.

“I was born into a wrestling family; my grandfather, my dad, and all of my older brothers wrestled,” Andrews said. “When my dad asked me at age six if I wanted to wrestle, it just made sense to say yes.”

In high school, Andrews wrestled Folkstyle during the school year and Greco-Roman in the off-season.

He said he always felt more comfortable during the off-season competing in Greco-Roman competitions throughout the Midwest.

“I was always hunched over and tense in Folkstyle,” Andrews said. “I never felt relaxed wrestling in high school.”

Andrews said his body was built for and his technique flowed better in Greco-Roman wrestling. 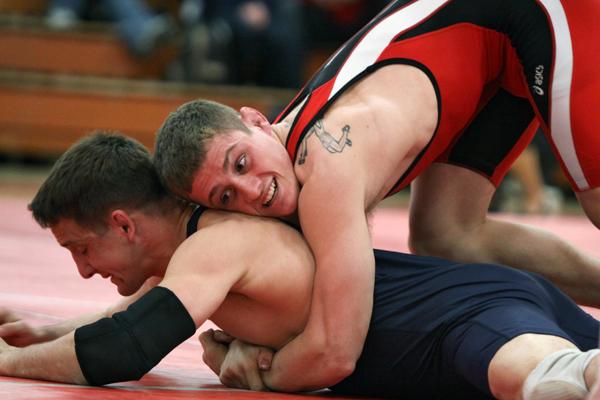 “I was always more of an upper body wrestler, had strong hips, and excelled in throwing,” Andrews said. “I was even born with a really big ribcage that has been really handy in gut defense.”

Even though he had some success in Folkstyle wrestling and could have gone on to wrestle at an NCAA university, Andrews remembers a quote on an Illinois wrestling Internet forum that kept him focused on Greco-Roman.

Andrews spent the first year after high school attending the local college, Aurora University, training by himself and with a local club. He said it was a disappointing year because his training was disorganized and he didn’t place as high as he would have liked to.

Senior John Drendel, a good friend of Andrews, had already been up at the USOEC for a year and told Andrews to come up and train with them for a few weeks.

“If it weren’t for Drendel, I never would have found out about the USOEC or gotten my scholarship here,” Andrews said. “After my first training session here, there happened to be one resident spot that had just opened up and the coaches said they wanted me to take it.”

Andrews said the USOEC is a great place to train and being in Marquette seemed to be a perfect location for him to focus on what he needed to.

“It’s secludes us from bigger cities but also hardens you with the cold-deep-snowy winters we get up here, so I’m training in a tougher environment than most of my opponents,” Andrews said. “I am also surrounded by nature, beaches, and miles of four by four trails; its not everyday you wake up and see a bald eagle on the way to practice.”

Over the three years Andrews has been at the USOEC, he has had six head and assistant coaches.

Andrews said that instead of letting the changes phase him, he has pulled from every one of his coaches to help him become a better wrestler.

“We have had a lot of foreign coaches here and that is so good for us as American wrestlers,” Andrews said. “They have a completely different style of wrestling than we do so instead of being taken off guard, we have been better prepared than ever at international competition.”

The USOEC American coaches have olympic, world, and military medalists and coaching experience on their resumes. One that stands out in Andrews’ mind is 1996 Olympic Silver medalist Dennis Hall who coached him his first year at the USOEC.

“Dennis trained us to be conditioned physically and mentally,” Andrews said. “He kept pushing the entire team and it brought us closer together and more like a family.”

After the first year with Hall, Andrews went from having a terrible competition year to placing second at the Junior Pan Ams, a gold medalist at Universities, and seventh at the U.S. Open.

Teammate senior Alex Flemming said that he has seen Andrews improve greatly over the time he has been at the USOEC.

Even during his first year, Flemming said Andrews was a good man to have on the team.

“I’ve known him since my second year at the USOEC, his first, and even then he has been more of a leader on our team,” Flemming said. “He carries himself with a confidence and respect for the team that rubs off on everyone else.”

Flemming said he pushes his teammates every day on the wrestling mat and everyone has gotten better because of it.

Andrews second year at the USOEC showed only more improvement when he placed top six at international events like Sunkist Kids Invite, the NYAC Holiday Invite, and then a bronze medal at the Dave Schultz International Memorial.

With Olympic Trials done with, Andrews is wasting no time in getting right back to training.

“I’m stronger than ever now that I’m up at 74 kg and not cutting to make 66kg; I can focus on my wrestling now,” Andrews said. “I’ve got Universities coming up and hopefully will make a world team before the summer is out.”

Andrews, along with his USOEC Teammates, will be traveling to Akron, Ohio, to compete in the ASICS University Nationals next week. Weigh ins are on Thursday May 31 and wrestling begins at 9 a.m. on Friday June 1.