The ThinkPad X230i debuted on NMU’s campus this year, displaying its slimness along with a lack of a DVD drive.

As part of the Teaching, Learning and Communication (TLC) program, every NMU student is issued a laptop and the price is included in tuition.

“The X230i has half the weight of the older models, longer battery life, a faster processor, faster memory and a bigger and faster hard drive,” said Scott Krah, director of microrepair. “That being said, those were two things [DVD drive and firewire port] based on trends we have seen and heard that have been going away.”

James Wallace, a junior wildlife management major, has previously had a Lenovo SL410 and currently has the new X230i. 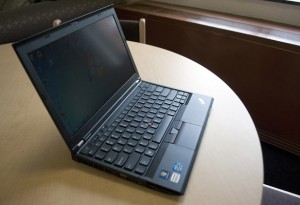 “I love the new ThinkPads,” Wallace said. “It runs 100 times better than the last one and has twice as many gigabytes, which is awesome when I’m playing Starcraft.

“I have six hours of battery life at full force versus two hours for the old one.”

According to Krah, most computers use USB 3.0, which is faster than firewire, and even higher-end models of laptops are straying away from DVD drives.

“We go as a group to Raleigh (N.C.) and get a briefing on what’s new and the trends in the industry, look at new products coming out, listen to student input from the year before and talk to a committee,” Krah said. “We don’t just go out and say ‘that’s the one we want.’

“Mostly everyone either downloads or gets their information online.”

Exavier Wooten, a freshman culinary arts major, said he is upset he cannot watch any of his DVDs or listen to CDs with the new school computer.

“It runs better than my laptop back home and I heard that the older NMU laptops have more problems,” Wooten said.
“However, I would probably rather have the older one just for the CD drive. I feel I can do much more stuff with it versus the new.”

Students who do need to use a CD or DVD are able to pick up an external DVD drive from microrepair, free of charge.

However, it is only available for students who need it for a class, not for purposes of leisure.

While the size may cause some concern over the durability, the X230i is as strong as larger models.

“We were concerned that the smaller laptop would break a lot easier,” Krah said. “He [an engineer] had one fall from a seven foot shelf on a wood floor. It ran flawlessly.”

A survey conducted by the bookstore last year for instructors found that 95 percent did not use a CD and of the 5 percent that did, only a small percentage were required to use it, Krah said.

For any other questions about the ThinkPad, or any school-issued laptop, call Microrepair at (906) 227-1192.