The NMU volleyball team dominated at the Ferris State Tournament over the weekend, beating four teams and finishing with the only undefeated record.

The ’Cats defeated Mercyhurst and Minnesota Crookston on Friday before winning against Glenville State and West Virginia State on Saturday, with two members of the team earning places on the all-tournament team.

Harley said the tournament prompted the team to keep going consistently even more than usual.

“There was a little more pressure knowing that we would have to perform for multiple matches in a row with little recovery time,” Harley said. “Going into the first match, we definitely wanted to start off strong because how we did in that match would determine how we played the rest of the tournament.”

Lopes once again led the ’Cats in the afternoon against Mercyhurst, scoring 13 kills. Ring and Hamilton continued their dominant presence, each with two block assists. Harley continued working hard with 31 assists. 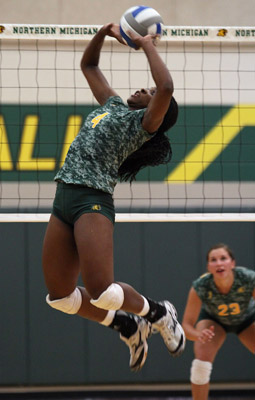 Lopes and freshman Alex Berger led the team in digs, Berger with 21 and Lopes with 10. Berger said NMU’s performance at Ferris revealed important pros and cons.

“After the tournament, our team was very successful in serving and serve-receiving as well as defense and offense,” Berger said. “If anything, we will probably need to keep working on our blocking.”

The ’Cats dealt superior serves against West Virginia State with 23 service aces above them. Ring led in the aces, serving a total of eight. Studnicka followed closely with five service aces, while Lopes and Berger both contributed four.

The competitive spirit remained with the team as they powered over Glenville, Nelson leading the way with four block assists and nine kills to maintain her prominent first start. Ring scored eight kills, with Hamilton and Studnicka also contributing. Senior Kalin Zimmerman had seven digs, while Berger had 10.

With 25 assists, Harley said she was aiming to maintain the offense while feeling out different strategies.

“My goals for this weekend were to run a consistent offense, and figuring out what works in certain situations and what doesn’t,” Harley said. “Serving got better this weekend, and we were able to force teams out of their system with our serves.”

The Tuesday, Sept. 4 match against the University of Minnesota Duluth brought the ’Cats a loss with scores of 25-21, 25-14,and 25-21. Minnesota-Duluth is currently ranked sixth in the nation, and both teams went into the match undefeated.

The Wildcats travel once again on Sept. 7 through Saturday,Sept. 8 at Missouri S&T, where they will be facing four other teams.