As 2012 marks the eleventh anniversary of the September 11 attacks, the NMU College Republicans and NMU College Democrats worked together to dedicate a memorial to the victims.

The event started with the College Republicans, placing a flag for each of the nearly 3,000 victims whose lives were lost during the attacks for every anniversary.

In the past few years, the College Democrats have joined in helping place the flags.

The flags were placed in the academic mall, close to Jamrich Hall.

“We have been doing this for at least the past four years, but with no written history as members have come and gone, it’s hard to know when it began exactly,” said Justin Bis, president of the College Republicans and senior political science major.

In the past, members would create the display during the early morning hours of Sept. 11 but for this year, they decided to put it together the night before.

“This year we had double the amount of people as we had in the past,” said Brandon Zanon, vice president of the College Republicans and sophomore pre-med major. “This year it took us an hour. Last year it took at least an hour and a half.”

For two years in a row, the College Democrats have also gathered to help with setting up the display.

“It’s a non-partisan event that’s above partisan politics,” said Drew Janego, president of the College Democrats. “We work with the College Republicans to show students a nice tribute to the victims of 9/11.

“It’s important to show support and it shows a goodwill of working together.”

The flags were supplied to the College Republicans years ago from various donors.

The organization plans to continue the memorial for every anniversary.

“As long as we’re here, we’ll keep it going,” Zanon said. “We’ll have to keep a written record for the future.”

Other groups have been invited to help set up the display in the past. 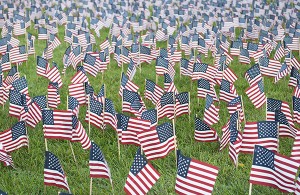 Despite being sponsored by the College Republicans, anyone is allowed to participate in the annual memorial.

“We always invite other groups, but it’s especially important this year to have the College Democrats involved,” Zanon said. “This is a bipartisan event. Due to being an election year, it’s important to stress and magnify the message of the memorial.”

The display remained in the Academic Mall during the day of Sept. 11 and both organizations worked together again to disassemble the display during the night.