For many students, the presidential election coming up this November will be the first in which they can partake; however, becoming a registered voter can present confusion for those who have never previously done so.

To register to vote, one must be a U.S. citizen and be at least 18 years of age. The deadline to register to vote for the general election is Oct. 9. Students can use their home address to register, but they can also use their residence at school if they have been residing there for at least 30 days. Election day is Tuesday, Nov. 6, and the polls are open from 7 a.m. to 8 p.m.

Students from out of state can still use their address at NMU to register and they would be registered as voters in Marquette. Michigan varies from other states because a voter registers with the town or city rather than with the county.

According to Dishnow, laws vary by state and some allow residents to both register via mail and send an absentee ballot; he recommends out-of-state students check with their local clerks to know the rules. Those who register using an address on-campus would be in Precinct 6 of the City of Marquette and they would go to the YMCA, located at 1420 Pine St., to vote. 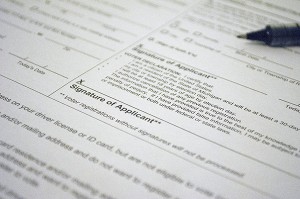 “It varies on a student’s situation, but for those who have never voted or registered before I would recommend they register here [in Marquette] to vote,” said Drew Janego, president of the College Democrats and senior political science major. “If they’re already registered, I recommend an absentee ballot to avoid confusion. It truly varies on a case-by-case basis, but in general, an absentee ballot works smoother than having to re-register.”

According to Brandon Zanon, vice-president of the College Republicans and sophomore pre-med major, he recommends those living year-round in Marquette to register here but for those in the dorms or living in Marquette temporarily, he suggests an absentee ballot using the original home address.

“In the end however, the most important thing is getting out to vote,” Zanon said. “A lot of people say the electoral college vote doesn’t matter but if we don’t vote, then they don’t know who to elect. It’s an important right as Americans that we should exercise.”

The election is vital for college students as relevant issues such as education have arisen, and registering and going out to vote is a vital part of the electoral process, according to Janego.

“It is required to ask for picture ID; however, if you don’t have it there is a certificate on the back of the application that you can sign attesting to the fact you don’t have one,” Dishnow said. “They won’t prohibit anyone who doesn’t have an ID.”
While some states have varying laws, Michigan requires a valid excuse for an absentee ballot. With one, a person must apply in writing to his local clerk’s office and send with it an application, which the clerk must receive by 2 p.m. Saturday, Nov. 3, according to Dishnow.