A new skatepark is being constructed in Marquette by a crew of professional skatepark contractors at the corner of Pine Street and Fair Avenue.

Spohn Ranch, the company building the park, is based out of Los Angeles and builds skateparks in communities all over the country.

Skate Plaza Committee member Nheena Weyer Ittner said they were very particular when choosing who would construct the park. 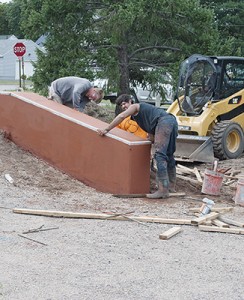 “We decided right from the beginning we needed experts, and that’s exactly who we got,” Weyer Ittner said. “We were told by Spohn Ranch that we are getting a state of the art plaza.”

The beginning of this project took place seven years ago after people were coming to Weyer Ittner concerned because kids were getting opposition around town for skateboarding.

The Marquette City Commission promised to match the committee $75,000 for the project if the skate plaza committee raised $150,000 for the construction of the park.

With the help of donations and fundraisers, they raised enough to start on the project.

“It was great to know they believed in our project and had set aside money for us,” Weyer Ittner said.

The Spohn Ranch crew travel about nine months out of the year designing and building skateparks in various cities around the United States.

Their latest project, a concrete portable bowl, was featured in the Mountain Dew tour last month in Ocean City, Md.

With the opening debut for the skatepark nearing at the end of September, the six men with the Spohn Ranch crew are working to complete this unique three level skatepark.

“In this park, we wanted to embrace well known skate features as well as our own designs into it as well,” said Anthony Zavala, head of the Spohn Ranch crew.

The park will feature unique designs such as the California high bank, the Barcelona wall and hipped flat banks.

Evan King, an avid skateboarder and junior music major is very eager for the skatepark to be finished.

“This is definitely something that a lot of skaters in Marquette have been waiting for,” King said. “Having a brand new skatepark will definitely make the community happy.”

After the skatepark is completed, the city will take over ownership and maintain it.

It will be open to the public and will have the same rules and regulations as any other park in Marquette.