Golfers host only home match of the season

The tournament was played in match play style, which means the teams play in six individual nine hole matches.

Out of all the matches played, the ’Cats won 24 and lost 30 for a 44 percent winning average. 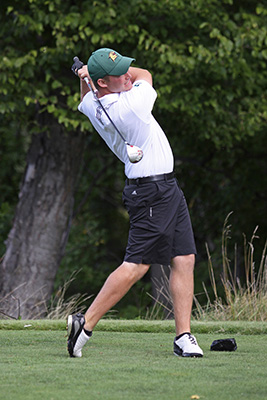 Reid won five of his six matches and finished the tournament in the final four.

Head coach Dean Ellis said due to the unique format of the tournament, it was difficult to gage just how well the team as a whole did.

“Patrick Sweeney played well all weekend and won four of his six,” Ellis said. “There are more that played well but hopefully we can continue from there. Just being able to win 44 percent of our matches is a positive thing in itself.”

Mantha said the team did not do as well as they had hoped, despite the fact that they were very prepared for the tournament.

“I played well but my results didn’t show it,” Mantha said. “That is one of the bad things about match play, if you and the guy you are playing against make a birdie, it doesn’t really matter but if you bogie the hole you pretty much lose the hole.”

The ’Cats only get to play in a home tournament once every four years, and Mantha said the team had an advantage playing on their home course.

“Greywalls is a very difficult course, and we knew our way around it which gave us an advantage that the other teams didn’t have,” Mantha said. “The problem was, some guys just had a bad day, and that course can really get you if you aren’t hitting the ball very well.”

Ellis said Greywalls is a difficult and demanding, yet beautiful course.

Because of that, Ellis said the team did not have a home course advantage.

“It doesn’t matter how many times an athlete plays the course, it will still be a difficult experience,” Ellis said. “I think in general, the ten teams that were there enjoyed their experience at Greywalls.”

Mantha said the level of competition at the tournament was very high and some low numbers were shot during the weekend.

“I am excited to keep playing and seeing more people because I really like playing against good players, it makes it very exciting,” Mantha said.

The Wildcats held a tryout last week to determine who would be competing in the tournaments during the fall season.
To make the playing squad, players had to finish in the top five of all the people trying out.

“We got our roster to 12, which is a good sized team for us,” Ellis said. “Twelve quality players add a lot of depth and competitiveness to the team, but to get it from 12 to five will be a very competitive thing.”

Mantha said the team will be doing some individual training this week to prepare for their next tournament.

“Dean will probably spend about an hour with each of us working on some stuff,” Mantha said. “Hopefully we get a lot done.”

The Wildcats next tournament will be the GLIAC North Neutral, which will take place the weekend of Friday, Sept. 21 through Sunday, Sept. 23 in South Haven, Mich.