Rain or shine, NMU students and alumni continue to celebrate this year’s homecoming events as the week-long event draws to a close.

The celebration began for students with Sunday’s Dead River Games, which pitted groups of students from various organizations and clubs around campus against each other in several different contests. 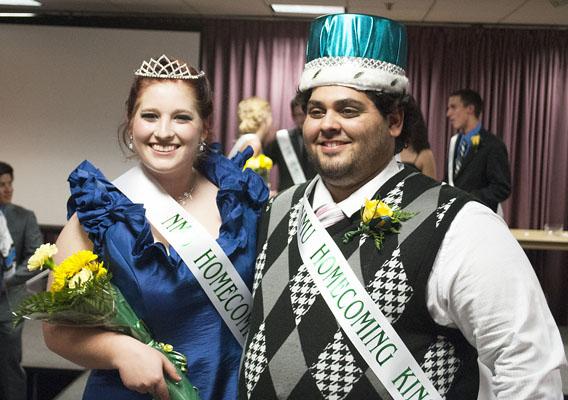 “We had one of the largest turnouts for the Dead River Games this year,” said special events committee adviser Lizzie Corser. “The weather held out, and there were around 600 students getting messy and hanging out in the water.”

The Magers Alpha team from Magers Hall claimed a victory in the obstacle course, while Tundra Team 1 from Meyland Hall won the ice cream scoop competition.

The sand sculpture competition was won by The Studio team from West Hall.

The large student turnout was not limited to the traditionally care-free and messy Dead River Games, Corser said.

The stepping competition on Tuesday night, which has become an increasingly popular event in its five years as a part of the homecoming celebration, saw one of its largest turnouts as well.

“We also had an amazing turnout for the stepping competition and actually had to start turning students away,” Corser said. “We packed over 500 people into Jamrich 102, and eventually had to open up Jamrich 105.”

Students were able to watch the competition between rooms via a live video stream. Magers Hall took home the win.

On Wednesday night Sept. 19, the king and queen competition filled the Great Lakes Rooms of the University Center with students anxious to see the homecoming court.

The event was emceed by comedian Adam Mamawala, who asked the final 10 contestants a series of questions before the judges selected a winner.

“It’s been a really crazy week; we’ve been so busy in the residence halls but it’s been totally worth it,” Hamblin said. “We’re really looking forward to the NMU Game Day. It’s going to be a great opportunity to bring the university and the community together.”

The celebration continues at 9 p.m. on Thursday, Sept. 20, there will be a Bingo Night hosted at the Marketplace on campus.

Starting at 5:30 p.m. on Friday, the homecoming parade will take over Third Street. in downtown Marquette. There will also be an All Colleges Reception from 6:30 to 8:30 p.m. at the Landmark Inn, and a Funky Folk Dance featuring the Marquette-based band U.P. Gumbo at the Ore Dock Brewing Company.

The women’s soccer team will host Michigan Tech at 11 a.m. on Saturday, Sept. 22, and the men’s football team will face off against the Ashland Eagles at 2 p.m. in the Superior Dome. Following the games, there will be a 5th Quarter Reception at 5 p.m. at the Holiday Inn.

Saturday will also host a new event, NMU Game Day, which will feature games for kids, an appearance from the homecoming court and a speech from NMU interim president David Haynes. NMU Game Day will take place from 11 a.m. to 1:30 p.m. along Third Street.

For more information on homecoming events, call the Center for Student Enrichment at (906) 227-2439 or email [email protected]