Cliff jumping at Black Rocks and Little Presque is a popular pastime for many Northern students, and yet the dangers associated with cliff jumping are often disregarded by those who do it most frequently.

With the growing amount of students that have found cliff jumping to be an easy way to cool off, there is an increasing amount of responsibility that the Marquette Coast Guard takes on to ensure safety at places like Little Presque Isle and Presque Isle, according to Coast Guardsman Gary Hegler. 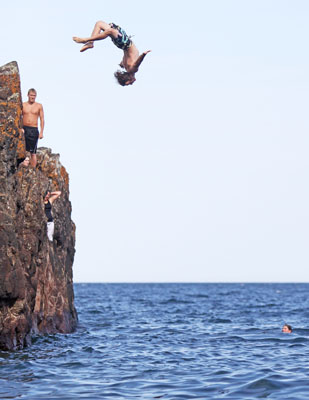 While the Coast Guard has stated in past press releases that it’s not illegal, they do express that cliff jumping is highly dangerous and not recommended.

Yet regardless of what authorities may say, it’s easy to ignore the dangers of cliff jumping, especially after watching others do it without harm.

“I’ve seen people jump from places that aren’t even designated for jumping (on Little Presque),” junior marketing major Mike Ashbaugh said. “They just take running starts over huge gaps and get extremely close to the rocks on the way down.”

In the wake of a cliff-jumping accident on Saturday, Sept. 1 at Little Presque –– which, according to the Mining Journal involved an 18-year-old female student whose name has not been disclosed by local police –– it’s become increasingly important to keep in mind some key considerations when jumping off rocks into potentially dangerous water.

As with what happened to the female student at Little Presque, it’s important to know how far to jump to avoid hitting rocks on the way down. Hegler said this can be difficult for students who are new to the area and to cliff jumping in general.

While the student at Little Presque received head lacerations and was in a state of shock once the coast guard reached her, she did not receive any life-threatening injuries.

“Sometimes people just slip,” Hegler said. “The rocks are wet and their feet are wet. Sometimes, they don’t jump far out enough, like the girl we had at Little Presque Isle who bumped the back of her head on the rocks. Usually (the rocks) slope out, and it’s usually once a year that we’ll have an instance like that.”

Another cliff incident, almost a year ago to the date of the Little Presque fall this year, involved a 17-year-old Gwinn girl who, according to the Mining Journal, was simply walking too close to the edge of an overlook on Presque Isle. Her nearly 100-foot fall left her in critical condition with rib, spleen and arm injuries.

As far as how EMTs respond to falls like those at Presque and Little Presque, Hegler said it relies heavily on location, since most of the time EMTs can’t reach victims of cliff accidents. It’s then up to the Coast Guard to send someone to the victim.

“Most of the time the ambulance can’t get directly to where the person is,” Hegler said. “At Little Presque, they would have had to go through two or three feet of water to get to the island out there. So we’ll get the call and we’ll launch our boat.”

According to Hegler, it typically takes the Coast Guard exactly 19 minutes to get to Little Presque from their headquarters on North Lakeshore Drive.

As reiterated in coast guard press releases whenever an accident occurs in the area, it’s really up to individuals to look out for themselves and know when to jump and when to pass.

“We can’t say you can’t jump somewhere,” Hegler said. “But if you want to go out, make sure you’re with an experienced person who has been out there and before you just dive in, just have a person go down there and see if there are any rocks and to get to know the depth.
“Be safe and be aware of your surroundings, that’s the main issue.”