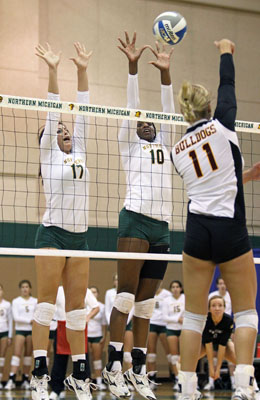 The NMU volleyball ’Cats continued their success last weekend against Saginaw Valley and Lake Superior State, bringing them to a four-game winning streak.

“The team is becoming even more consistent, but is struggling in a few areas,” Yoder said. “We do expect to continue to improve daily so that we can raise our level of play to meet the ever increasing challenges of the GLIAC, and our goal is to win conference.”

Although the ’Cats lost the second and third sets, the team managed to stay on top for the remainder of the game.

Junior setter Kellisha Harley had 50 assists, a season high, while also getting 14 digs.

Berger said her only goal for the weekend was to play defense well, as well as give her all towards everything else for the team.

“Even though we won, as a team, we always want to be able to win in three sets,” Berger said. “However, that being said, winning the match against Saginaw in five still truly showed us how amazing we can play and how much of a team we truly are.”

LSSU won the third set before NMU clinched the game in the final set.

Studnicka once again contributed to the team, leading the offense with 17 kills, 14 digs and three service aces.

Yoder said the two athletes were performing admirably throughout the weekend, along with the setters of the team.

“Both of our left-side hitters, Lina Lopes and Lisa Studnicka, really stood out,” Yoder said. “Our setters were also pillars of steadiness for our team.”

Harley brought another 42 assists for the team. Berger led the team in digs with 18, while Zimmerman was right behind her with nine.

Berger said the travelling between two matches over the weekend was not a problem for the team on the court.

“I feel okay with the travelling,” Berger said. “We have been on the road the entire season already, so it isn’t that much of a difference to what we are used to.”

Yoder said the team is already looking forward to their first home game after being on the road for so long.

“I would like to encourage and ask our NMU student body to come out in force to see us play on Sept. 25 versus Michigan Tech,” Yoder said. “Wear green to make the stands full of Wildcat fans.”

The ’Cats will be travelling once again next weekend to Ohio as they finish up their 13 straight games on the road.

NMU will play on Friday, Sept. 21 at Painesville, Ohio to face off against Lake Erie College. Then, the team travels again on Saturday, Sept. 22 to challenge Ashland.