The road woes continued for the NMU football team last Saturday, Sept. 15, as they dropped a conference game against the Ohio Dominican Panthers, 47-7.

Head coach Chris Ostrowsky said his team is committed and playing with effort, they just have to work through the growing pains that come with a young squad.

“It’s really simple, we can’t give up 50 yard touchdown passes and turn the ball over four or five times,” Ostrowsky said. “As long as you keep doing that you’re going to keep losing games. It’s one of those situations where as we get better as a program you’ve got to get better at little things.” 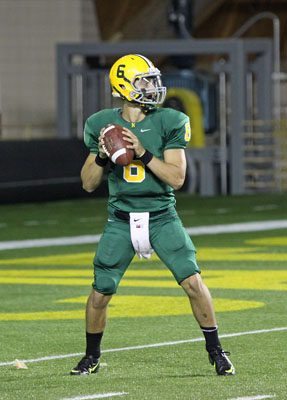 The combination of little mishaps led to bigger problems for NMU. The ’Cats (0-2 GLIAC, 1-2 overall) had a chance to get into field goal range near the end of the first quarter to break open a scoreless game. Redshirt quarterback Ryan Morley dropped the ball on an attempted screen pass.

“It wasn’t a forced fumble, it wasn’t a blitz where we didn’t pick it up it just fell out of his hands,” Ostrowsky said. “Consequently they scooped it up had a first-and-ten on the 50; went the other way and kicked a field goal to make it 3-0. We gain the first down, we have a great older kicker; we’re up 3-0. That’s a big difference.”

After the field goal the Panthers tacked on three touchdowns in the second quarter to make it 24-0 at the half including a 53-yard heave with nine seconds left.

“We have two freshmen at safety and they throw the deep ball for a 50-yard touchdown pass,” Ostrowsky said. “Those things will never happen to a seasoned team, an experienced team which is what we will be in two years if the same players are here and developing and I can’t imagine they wouldn’t be.”

After holding the Panthers scoreless in the first quarter, the ’Cats gave up touchdown pass plays of 93, 53, 28, 49 and 14 yards. Ostrowsky said the focus for the team is limiting turnovers and stopping the big gains on defense.

“At this point our emphasis is ball security, take care of the football,” Ostrowsky said. “Our emphasis on the defensive side is don’t give up the big play, make them drive it, 12, 14, 15 plays, and then if we can come through a game and lose and they had no touchdowns that were bigger than five or ten yards and we had zero turnovers, we’re progressing as a football program.”

Of the five Wildcat turnovers three came through the air as Morley was intercepted three times. Morley understands games like this are part of the learning curve but he isn’t blaming age as a factor.

“The first thing I went to was film; I’ll be the first one to admit I can’t play like that if you want to win,” Morley said. “We’re still learning a lot as an offense and a defense. Being young isn’t an excuse because on the field it doesn’t matter, but we’ve got to keep learning.”

Morley found the endzone for the first time this season with a nine-yard touchdown pass to junior wide receiver Christian Jessie with four seconds left in the third quarter. Senior defensive lineman Zach Anderson set the play on an interception that he returned 22 yards.

“We marched down the field and threw the first touchdown of the year for us,” Morley said. “That was our goal during the game at the end and we just have to use that as a learning experience.”

Ostrowsky said the poise his young quarterback has shown leading the offense has impressed him through the first three games.

“He’s so in complete control playing the position because of that he’s able to handle the things he’s not experienced in, he’s able to handle the things teams are challenging him with,” Ostrowsky said. “Everything he’s doing, he’s doing for the first time so we’re going to make mistakes we’re going to look bad at times but I believe in him and he knows that and together we’ll work really hard.”

The ’Cats are back in Marquette this weekend as they take on the No. 17-ranked Ashland Eagles for Homecoming weekend. The action gets underway at 2 p.m. Saturday, Sept. 22 in the Superior Dome. NMU defeated Ashland in 2010 but the Eagles won last season 45-16.