The NMU men’s club hockey team swept the first series of the season with 7-3 and 7-2 victories against Michigan Tech on Friday, Sept. 14 and Saturday, Sept. 15.

Senior defenseman Evan Weber said the entire team, even the veterans, had the first game jitters on Friday. 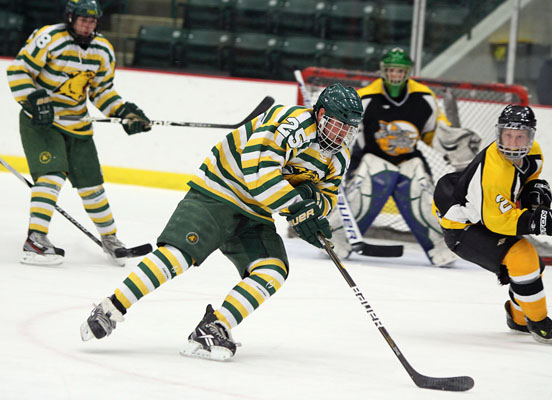 “We were nervous, especially the young guys,” Weber said. “You could see it in our play; we were trying to rush a lot of plays and the puck was bouncing all over the place.”

Weber said the team had to take a deep breath and just focus on one shift at a time. After they got the initial jitters under control, he said the team started to play really well.

“The veterans got our skates under us first and started playing our systems,” Weber said. “Not long after, the younger guys followed suit and we got a good win to start off the season.”

Defensemen don’t usually get a chance to score, but Weber said they were able to get set up for goals in both of the games this weekend.

“Our right wing was getting covered really closely by Tech’s defenseman and there was an open lane to pass to me,” Weber said. “I was able to move the puck up from the blue line and catch the back of the net on the goalie’s far side.”

Weber was able to get set up again on Saturday night and score from the blue line; getting the puck past a lot of traffic in front of the net and sink it.

Senior defenseman Shane Feehrey was also able to get the puck into the back of the net.

“I got the puck on the boards and was able to walk it towards the center of the ice,” Feehrey said. “I took the shot and sank it; it felt great getting my first goal out of the way.”

Overall, Weber said the lines are starting to come together really well.

He said the team’s first line is made up of one veteran, senior Brad Gicopoulos, and two rookies, freshman Anders Carlson and sophomore Wolff Belanger, and has already had a lot of success early on in the season.

“Gicopoulos’ line looked really good Friday and Saturday,” Weber said. “They are clicking and finding each other on the ice really well.”

Head coach Carl Trosien said replacing athletes on lines was difficult because he needed to find players that fit the puzzle for the missing players on each line.

“With our first line, Gicopoulos was the only veteran left, so we had to figure out what he needed out there with him to be a successful line,” Trosien said. “Once we saw what he needed in Carlson and Belanger, we knew we had the puzzle completed, and it showed this weekend in the games.”

Even with a swept series, Feehrey said the team is looking for issues they can nip in the butt right away as they head to play some impressive competition.

“We need to work on the defensive zone and pick up on the far end guy,” Feehrey said. “We’ve got Iowa next weekend who was ranked really high at the end of last season, so we have to bear down on any weaknesses we may have.”

Trosien said playing teams like Iowa and Central Michigan, who have been ranked top eight in the first couple of weekends will be tough but will be huge for regional rankings.

The team wants to earn a spot at regionals this year which is their main goal according to Trosien.

“We need to feed off the challenge instead of being intimidated by it,” Trosien said. “We have to not just split a series against teams like them, we need to sweep them to make regionals.”

Weber said the team seems to be full of a lot of well-rounded athletes that want to be on the ice and work for their success.

“A lot of the new guys are buying into our systems and we have a great mix of speed, talent, and hard work on the ice,” Weber said. “We may not have amazing skill but we have a lot of hard working players, and I’d rather have that on my team.”