During the weekly ASNMU meeting, what started off as a slow and budget-filled discussion quickly heated up when a motion passed the articles of impeachment of ASNMU President Benjamin H. Stanley.

On Monday, Oct. 1, the motion to impeach was passed by eight out of nine general assembly board members about two hours into the meeting. A few members had to leave early, thus excluding themselves from the vote.

“This is nothing personal,” said ASNMU Vice President Kelsey Hayes. “This is how the board feels.”

The board went into closed session and the public was asked to leave. About 30 minutes later they reopened the doors and the articles of impeachment of Stanley became the primary concern of the meeting. Despite efforts made by off-campus representative Rachael Fisher to postpone the vote, citing concerns that it may be too hasty of a decision, the board voted to continue with the vote. 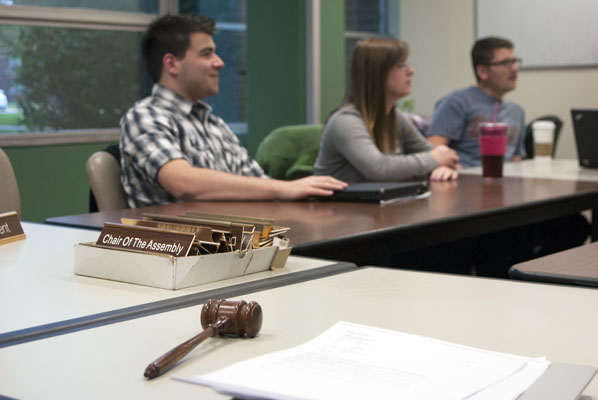 According to Stanley, there was no indication the impeachment was coming.

The articles of impeachment contain a number of concerns ASNMU claims they have dealt with over the course of Stanley’s presidency.

According to Stanley, he did have proper authorization to sell the T-shirts. Stanley also denies the claims that he was residing in the ASNMU office.

According to Hayes, the ASNMU constitution was changed at their last meeting. The new constitution states the ASNMU president appoints five members to the judiciary.

“The major change was that there will be a new ASNMU judiciary,” said ASNMU adviser Larry Pagel. “Now, ASNMU has to name and approve the new judiciary, which is appointed by the president and approved by the general assembly by a three fourths vote.“

Because of the recent change of the ASNMU constitution, the judiciary board has not been appointed until now.

According to Hayes, Stanley has called an emergency meeting to be held at 7 p.m. Thursday, Oct. 4 at The Peter White Lounge to appoint people to ASNMU judiciary.

“He is trying to appoint these people, and the board wants to meet the people before,” Hayes said. “There has not been an agreement between the board and Stanley.”

According to Hayes, if Stanley’s appointments do not get approved, the vote to have Stanley impeached will go to the student conduct board, which will not be open for the public to comment and it will not be an open forum.

If the members do get approved to the ASNMU judiciary, they will then be the ones to deal with the articles of impeachment.

If Stanley is impeached, Hayes will be next in line for the ASNMU president position.

“I want to see ASNMU be a success,” Stanley said. “They haven’t had a great reputation for years.”

Until the appropriate judiciary gives its final word on the impeachment, Stanley still reserves his power as president.

The full articles of impeachment of Benjamin H. Stanley can be found on The North Wind website.