The GLIAC has been tough on the Wildcat football team this season, as NMU lost their fourth straight conference game, 44-6, against Hillsdale on Saturday, Sept. 26.

The ’Cats (0-4 GLIAC, 1-4 overall) struggled to stop the Chargers on third downs where Hillsdale converted 10 of 13 chances. NMU defensive coordinator Brian Newberry said getting third-down stops has become a point of emphasis. 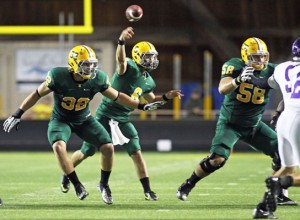 “We didn’t do the things necessary to give ourselves a chance to win,” Newberry said. “We had chances to get off the field on third down and we didn’t do it. It’s not a matter of us playing hard—I think we’re doing that—it’s just understanding the game and executing it when it counts.”

Newberry said the key to getting off the field on third downs is to force teams into longer yardage situations. He noted the importance of first down stops.

“We always talk to the kids about money downs,” Newberry said. “Money downs are first downs when you hold them to one or two (yards). There is a direct correlation with your success on first down and your success on third down. If you’re not very successful on first down, you’re giving up three, four, five yards, then they are going to get in situations when it’s third and short.”

The defense gave up 34 first-half points. In the second half, the ’Cats made changes and held the Chargers to 10 points. Newberry said the young defense is progressing.

“Our kids kept playing hard and we didn’t make a lot of the same mistakes that we made in the first half, in the second half,” Newberry said. “The young guys are growing every week. It might not reflect that on the scoreboard but they’re getting better.”

The ’Cats lone scores of the game came from the foot of senior kicker Rockne Belmonte who connected on 35- and 46-yard field goals. The 46-yarder was the longest he has hit in two years.

Senior running back Prince Young bounced back with his first 100-yard performance since week two. Young racked up 116 yards on 26 carries.

“He’s an older guy who is really carrying the load offensively,” said head coach Chris Ostrowsky. “We’ve had an extraordinary amount of injuries on the offensive side, and I thank God he’s still available and healthy. It gives us some stability, it gives us some trust and it generates some offense.”

Despite the slow start, Ostrowsky said the program hasn’t lost focus and he is impressed with the team’s work ethic.

“People are committed to each other and six weeks into the regime there’s not a whole lot of panic by anybody involved in the football program,” Ostrowsky said. “So we’re going to continue going in the same direction with the understanding that only hard work will get us better and our youth will become experienced, and I’m pretty confident the result will be different as we grow.”

The Wildcats return home this weekend as they take on Michigan Tech for the battle of the Miner’s Cup.