Wildcats skate past foes on the road

For two weekends in a row, the men’s club hockey team has defeated top ranked teams in the Central ACHA Region.

Head coach Carl Trosien said the Iowa game was huge for the team and he hopes that momentum keeps going. 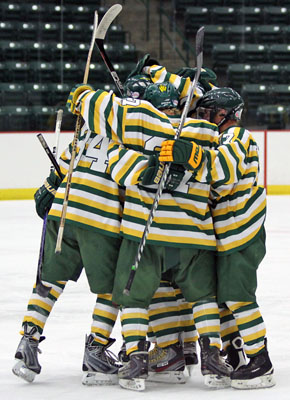 “Iowa was a good hockey team and will be a ranked team in the Central Region, so this was a huge step in the right direction,” Trosien said. “If we want to be ranked, we have to beat ranked teams.”

Junior right wing Kellen Michalak said the team was not just playing Iowa, they were playing the road as well.

“It was our longest trip of the year and our first overnight,” Michalak said. “With all the new guys and team on the road, I didn’t know how we were going to do.”

The team lost to Iowa in the first game 1-2. Iowa scored in the first two minutes of the game, the ’Cats tied it in the middle of the second period, and Iowa pulled ahead in the beginning of the third.

Michalak said the team played hard the last two periods and that combined with Iowa’s two fluke goals led to his team losing.

“We really controlled the play in their zone and utilized our physical attributes that most teams don’t have,” Michalak said. “We are not afraid to throw our bodies around and rough things up.”

Saturday’s game against Iowa ended in a 7-1 comeback win for the Wildcats. Trosien said there was a huge difference between the first game and the second.

“There was a full 60 minutes of hockey on Saturday,” Trosien said. “We controlled the game from the drop of the first puck to the last buzzer.”

NMU scored three goals within the first eight minutes of the game and Iowa was able to score on a power play early in the second period. The ’Cats answered with a goal two minutes after Iowa’s and then three more in the third period.

Michalak said Saturday’s game was the best hockey he’s seen in a long time. He said the team was nine for 10 on kills and three for four on their penalty plays.

“Our special teams did a great job killing off the penalty kill; a five-hundred record is considered really good for specialty teams, but we were better than that in that game,” Michalak said. “I’ve never played on a team that played that well for 60 minutes.”

At Ferris State, the Wildcats beat the Bulldogs 4-1 and 3-2. Last season, Ferris beat the ’Cats in an overtime shoot out at a home tournament.

Senior center Brad Gicopoulos said because of the loss last season, the series was a big deal for the team this year.

“We knew going in it was a big game; they beat us with one minute left by one point last year,” Gicopoulos said. “We were at their barn this time and everyone was pumped; it was going to be a redemption game for us.”

Game one on Friday of last weekend was dominated by the ’Cats ending the second period in a 4-0 lead. Gicopoulos said the team played too comfortably being so far ahead and Ferris was able to score.

“We called for a timeout and reminded the team that Ferris came back from a three point deficit to beat us four to three last season,” Gicopoulos said. “That got the team’s attention and we held on to the win ending the game four to one.”

The second game against Ferris ended with a 2-2 tie at the end of regulation time. With 20 seconds left in overtime, Gicopoulos got the puck and said he was not going to let the winner be determined by a shoot out again.

“The loss last year is still fresh in our minds, like it was just yesterday,” Gicopoulos said. “I got a pass and was one on one with a defenseman and was able to find the back of the net to finish the game.”

Trosien said goalie Jeff Ryan played very well in both series. Michalak agreed and said it was Ryan who kept them in most of the games.

“He had some great saves in heavy traffic,” Michalak said. “He was the backbone in giving us the chance to win.”