The NMU volleyball team swept Finlandia on Tuesday, Oct. 9, 3-0 following a split weekend competing on the road in Ohio.

Coming off of a loss against the Walsh Cavaliers on Saturday, Oct. 6 the ’Cats took to the court to win the match against the Finlandia Lions in three sets, 25-7, 25-4 and 25-9. With the victory, the Wildcats improve to 13-6 overall. NMU head coach Dominic Yoder said the game allowed opportunities for more athletes to play while allowing better communication between the starters.

“The game gave our non-starters a chance to play and enjoy the moment of being successful,” Yoder said. “I thought that everything worked out well on the floor. The non-starters got to communicate with some of the starters that we mixed in, and they got to really figure out how to play well together.” 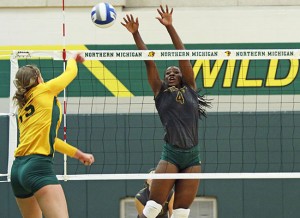 The Wildcats faced off against Malone University on Friday, Oct. 5 and Walsh on Saturday, Oct. 6. Yoder said the athletes worked together with their usual consistency, and some of them stood out.

“Sarah Hamilton and Kalin Zimmerman both had good matches versus Malone,” Yoder said. “Our team defense, serve and pass both worked really well.”

Herron led the offense in the match, bringing a high of 13 kills. Hamilton and Lopes added 11 kills each. Zimmerman led the team in digs with 21, while Herron and Lopes each contributed 12.

Defensively, Harley recorded 40 assists. Herron said the ’Cats entered the weekend with goals and worked to achieve them in the first match.

“We came out this weekend focusing on our play and what we could do to improve ourselves,” Herron said. “Against Malone, we played with good energy and both our offense and defense did a very good job.”

NMU won the game with a .130 kill percentage and had a 47 match kills overall. On Saturday, the ’Cats fought a five-set match against the Walsh Cavaliers, losing 2-3.

NMU started the match by taking the first set, 29-27. The Cavaliers answered, winning the second set 25-21.

The Wildcats returned after the break to win the third 25-23. Walsh took the final two sets of the match, 25-21 and 15-12.Yoder said the match gave NMU openings to move ahead, but the team’s consistency faltered.

“We’ve lost three matches now that have gone to five sets,” Yoder said. “They were giving us opportunities to win, but we were just making critical errors at the wrong time.”

Herron led the offense once again with a match-high of 23 kills while also contributing 10 digs. Zimmerman led the team in digs with 20. Lopes maintained the line with 17 kills and another 10 digs. Defensively, Harley setup her team with 47 game assists.

The Wildcats concluded the match with an attack percentage of .163 and 61 kills, overall.

NMU will once again travel for their next match, which starts at 12:30 p.m. on Friday, Oct. 12 in Aurora, Ill. against Southern Indiana in the Great Lakes Valley Conference/GLIAC Crossover.

“For this coming weekend, we are going to work on eliminating our errors,” Herron said. “We’ll also be focusing on holding our lead, staying focused throughout the whole match.”