It was another conference game and another loss for the NMU football team as they fell, 17-41, to Michigan Tech in the battle for the Miner’s Cup on Saturday, Oct. 6.

The end result might have been the same for the Wildcats (0-5 GLIAC, 1-5 overall) but they made progress on both the defensive and offensive sides of the ball.

The other Tech touchdown came from a blocked punt.

“Anybody that has any idea what they’re looking at can see these guys growing up,” said head coach Chris Ostrowsky. “They’re giving up big touchdowns and now coming off the field and telling us what happened and then the next time it doesn’t happen.” 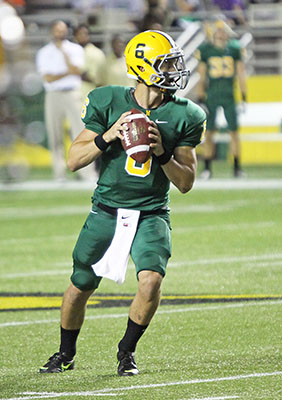 NMU stumbled out of the gates as the Huskies put up 34 first half points.

The Wildcats lost two fumbles and an interception in the first half.

Ostrowsky said those are mistakes you can’t make against a team like Tech.

“I thought it was a situation where we played a really good football team and came out and really made some mistakes that will hurt any team,” Ostrowsky said.

The Wildcats turned the corner in the second half on both sides of the ball.

The defense held the Huskies off the score board and the offense put up 14 points.

Ostrowsky said he was encouraged by the second half performance.

“Overall I was really happy with the way our players responded,” Ostrowsky said. “It would have been really easy at halftime to get in that locker room and pack it in but they came out and played hard and played until the end and almost had a shot late.”

Redshirt quarterback Ryan Morley took a shot in the third quarter and left with a concussion, finishing the game 11-24 for 63 yards and one interception.

Ostrowsky expects him to be out for a minimum of a week.

Scepaniak said understanding the system allowed him to excel in the game without getting first team reps in practice.

“Football is still a game, it’s the same no matter where you are,” Scepaniak said. “I know I’m going to know the offense mentally so without taking reps, I still know what I have to do, so it’s just about playing the game.”

The ’Cats were without senior running back and leading rusher Prince Young who violated team rules but got a boost from Jessie as NMU ran their version of the “wildcat offense” through him.

Jessie rushed for 27 yards, including a 15-yard touchdown on a direct snap. He also caught three passes for 96 yards.

Running the offense wasn’t an adjustment for Jessie.

“I’m very comfortable in it,” Jessie said. “In high school I played quarterback. I ran a spread option so it was nothing new to me. I just like getting the ball in my hands and seeing what I can do with it.”

The ’Cats had a shot at the Huskies early in the fourth quarter as they rattled off 17 unanswered points to cut the score to 34-17.

NMU’s chances were foiled by a blocked punt in the fourth quarter with 6:56 left to play that ended with a Tech touchdown and the final score of the game.

On defense the Wildcats were lead by junior defensive back Brandon Parson’s nine tackles.

NMU is at home again this weekend as they take on the Grand Valley State University Lakers (4-1 GLIAC, 5-1 overall) at 1 p.m. Saturday, Oct. 13.