With the recent closing of Upfront & Company, many local musicians are reaching out for alternative local venues to showcase their work.

Staff members say renovations are being planned, yet no deadline has been made as to when they will be completed, or when the facility is to be reopened, if at all. 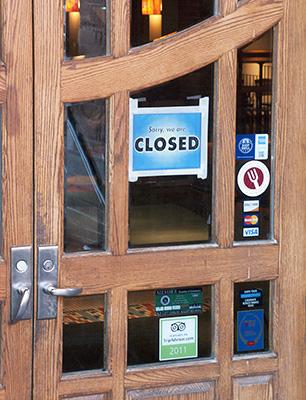 No official statement has been made as to why Upfront was closed.

“I don’t know if he knew how much it meant to all of us, but now it’s put in our own hands to do something with this music scene the Upfront has helped us develop,” said Tyler Detloff, of the band Kiddy Wompus. “It’s a huge loss but it could be a big gain.”

Now that Upfront has officially checked out of Marquette, music artists have turned to other places to play at.

According to Detloff, some of the remaining venues in Marquette are Wild Rover, Wooden Nickel, Merlot Mansion and The Blue Lounge.

The Doghouse has recently started booking Kiddy Wompus for Tuesday nights, but it is unsure if they will be booking others.

The Doghouse hope to see a positive response from the Tuesday night gigs and go from there. The Ore Dock Brewery has started booking some folk and bluegrass musicians as well.

“Music is kind of like a weed — It’s going to find a place to pop up,” said former Upfront booking and promotions manager, Mike Walker. “Hopefully someone else will offer the same kind of opportunity.”

Not only was Upfront just another place to play, but it had a sound system and stage that dominated most other venues, according to Detloff.

Most of the remaining venues in Marquette have little-to-no sound system. Bands that play at these locations need to bring their own gear, such as amplifiers and microphones, Detloff said.

Most of the remaining venues offer a cleared area or corner for musicians to set up, but nothing that can compare to the elevated stage surrounded by the entire bar that Upfront provided.

“It’d be nice to see someone encouraging people to start their own venue. It’s not an impossible task,” Walker said. “If someone has a little bit of capital or some friends all go in it, it wouldn’t be difficult to put on something together.”

According to Walker, the church on the corner of West Ridge and Third Street is for sale and could potentially be a new music venue if someone would step up to the plate and see the demand for a place like that.

“Under $180,000 for the whole thing and churches usually have really good acoustics,” Walker said. “Whether it’s a coffee shop or a sandwich bar, I don’t think musicians will really give a crap as long as it’s a place to play”
The church could be similar to the Merlot Mansion, a community-ran venue that usually averages about two or three gigs a month.

There is also a lack of shows for all ages in the current venues of Marquette. It is unfortunate that many people don’t get to enjoy the music scene until they are 21, Detloff said.

A persisting problem with this is that a cover is usually charged with these shows.

Many people miss the importance of paying those covers, as they are necessary for certain bands bound by contracts.

Detloff mentioned the student organization, First Aid Productions whom has some funding to bring artists to campus.

They could get local artists for next to nothing compared to how much they spend on some of the out of town musicians the bring in.