The NMU cross country team took advantage of their lone home race of the season on Friday, Oct. 12, taking first at the U.P. Championships.

The ’Cats outpaced rival Michigan Tech and Finlandia, using groups of runners to put distance between the competition.

Head coach Jenny Ryan said she likes the teamwork of her athletes.

“It’s good to see them run as a pack and team the first half of the race, and then they just all ran hard at the end,” Ryan said. “It’s great to see us finish one, two, three, four, five.”

Along with taking the top five spots, NMU captured nine of the first 11 spots en route to a perfect team score of 15. 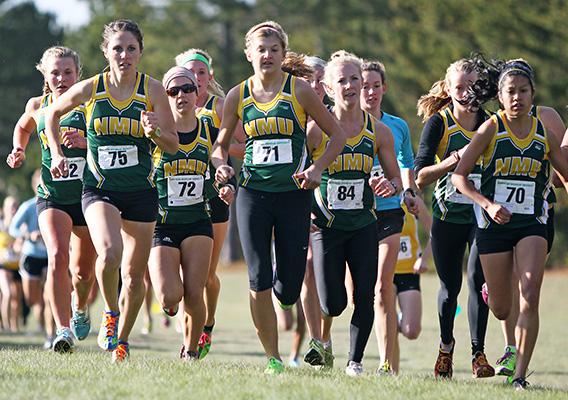 Sophomore Larissa Halonen, who finished second for the ’Cats, said having teammates around makes pacing easier.

“The depth has been unbelievable this year,” Halonen said. “Every race it feels like someone new has come in first, second, third, fourth, fifth; it’s great. It makes it a lot easier to have someone right next to you with your matching uniform on. You know if they can do it, you can to.”

Dye said the shorter race is a good way to quicken the pace heading into the final weeks of competition.

“The pace is a lot quicker and we can sustain the same pace for what would usually be the first half of our race for this entire race,” Dye said. “So it was a good time to tweak our speed.”

Halonen finished behind Dye with a time of 14:50, followed by freshman Megan Edic (14:52), freshman Mary Kate Cirelli (14:53) and junior Mallory Celaya (14:53). Dye said the length of the course didn’t change the team’s mindset.

“We went into this just like we would any other race, working together, talking to each other, making sure that we stay really positive because we believe that a team that works together is a team that goes to Nationals and that’s kind of our goal this season,” Dye said.

To make it to Nationals, the ’Cats have to get a top-five finish in their region, where they are currently ranked eighth.

The Wildcats dropped a bit after the Roy Griak Invite but Dye thinks they are still in contention for a top five place.

“After our third meet of the season, we were seeded fourth, so I don’t see why there is any reason that we can’t get there again,” Dye said.

NMU hits the road this weekend to gear up for the GLIAC Championship.

The race is at 11 a.m. Saturday, Oct. 20 in Midland, Mich. Halonen said the team is expecting a solid finish at conference.

“I think we have great potential to do very well this year,” Halonen said. “Conference is a week away, so we’re getting ready for that. We’re kind of tapering a little bit. We’re expecting to place in the top half definitely, hopefully even higher than that.”