The NMU hockey team went on the road to play in the second series of non-conference play against the University of Nebraska Omaha Mavericks, splitting the weekend with a loss and a win.

On Friday, the ’Cats suffered a loss, losing to Nebraska-Omaha 5-2. NMU returned for the final night with a different resolve, defeating the Mavericks 2-1. 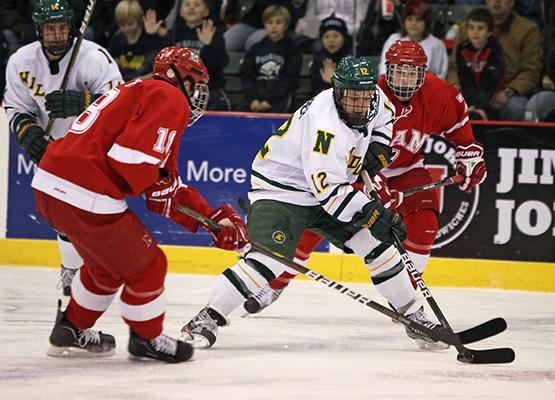 NMU head coach Walt Kyle said the team went into the weekend without the right mindset, but recovered it Saturday.

“I don’t think we played very good, and you have to give the other team credit,” Kyle said. “They are a really hard-playing team, very physical, and we got in there after a long trip. They came at us hard and put us behind the eight-ball, which we absolutely should have expected and we didn’t react very well.”

The UNO Mavericks started the game off on Friday leading 3-0 going into the second period.

The ’Cats answered the call to action 9:14 into the second when freshman forward Darren Nowick earned his first Wildcat goal, bringing the game 3-1.

Nowick said the team’s preparation could have used some fine-tuning before Friday’s performance.

“I don’t think we were prepared right,” Nowick said. “We were 2-0 going into the game, so the loss was educational. We didn’t have the legs and they came out strong. We came together as a team for the next game, so we did get on the right track.”

The Mavericks scored one more goal before Northern Michigan could get another, bringing the game to 4-1 at the end of the second.

Sophomore Reed Seckel brought the ’Cats into the third, scoring 13:12 into the period. Senior forward Matt Thurber assisted the shot.

“First night, there were no excuses,” Seckel said. “We need to be able to be ready to play in those situations, especially on the road. However, I really enjoyed seeing our team coming together to get ready to play. We started talking about ways to improve before the game, and we went out there and played hard. We did it and we came out with a 2-1 victory.”

In the crease, junior goaltender Jared Coreau started the game with 22 stopped shots.

Freshman goaltender Michael Doan took over with 13:11 remaining in the third period, saving 14 shots in his first appearance in the regular season.

“Michael played really well,” Kyle said. “Jared’s our guy to start our games, but when games like that happen, I want to be able to get Michael in. The experience on the ice will be important for him a little further down the line.”

Saturday night’s game went in the other direction for the Wildcats, as the team entered the arena with a stronger start.

Sophomore forward Ryan Daugherty started the team early with his second goal of the season in the first period, assisted by junior forward Stephan Vigier.

Aynsley said the way the team performed on the ice in the second game changed drastically from the previous night’s performance.

“On Saturday, I thought how much we hit them really changed a lot,” Aynsley said. “We were fast with all of our puck movements, and it was a good game, overall. I got put into a good opportunity with Thurber and Seckel, who gave me a great pass.”

Coreau remained between the posts for the extent of the game, stopping 35 out of 36 shots on goal. NMU had 23 shots on the goal for the night.

The Wildcats will be returning home to face off against the Notre Dame Fighting Irish.

Tickets are still available at any NMU ticket sales location, online, or by calling 906-227-1032.