The Wildcats put an end to their three-match losing streak on Friday, Oct. 19 and Saturday, Oct. 20, leaving the weekend 7-4 in the GLIAC and 15-9 overall. The ’Cats defeated the Ohio-Dominican Panthers, 3-1 and, the Tiffin Dragons, 3-0.

NMU head coach Dominic Yoder said the team wrapped up the weekend with good plays and energy, along with organization. 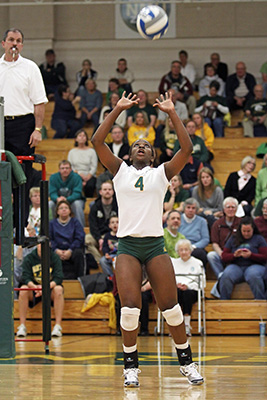 “We pass-served and sided out very well,” Yoder said. “That’s what really kept us in the lead. We switched our line-up a little bit, and one of the things that we really worked on was our blocking scheme. I think our team did a really good job.”

On Friday, the Wildcats defeated Ohio-Dominican in four sets. NMU won the first and second sets, 25-13 and 25-22. The Panthers came back in the third set, coming from behind the ’Cats to win it 25-22. In the end, the Wildcats clinched the match with a fourth set of 25-22.

“There was definitely more confidence tonight,” Yoder said. “It’s nice to get a win at home after those last two matches away. It comes down to just playing. When we come out and play, we have to play all 25 points. I think we did that for the most part.”

Senior left-side hitter Andrea Ring said even though the team lost the third set, they know what they need to focus on in the future.

“I’m glad we finished it out and got it done when we needed to,” Ring said. “We’ve been struggling with that lately, each individual player finishing what they were doing and completing simple tasks and things that we normally do instead of making errors.”

On Saturday, the Wildcats entered the fray with a better outcome, winning the match against Tiffin in three sets. The ’Cats swept the three matches, 25-16, 25-13 and 27-25.

“Siding out was one of the things we really have been focusing on,” Yoder said. “We’ve also been focusing on really forcing the other team to attack the ball to the center of the floor, giving our middle defenders a chance to go and dig the ball. I think they did a really nice job at challenging the ball back to the middle of the floor.”

Zimmerman led the defense with 14 digs against the Dragons.

Zimmerman said NMU went into the match with a renewed strategy following the two recent losses and the four set match against Ohio-Dominican.

“Every game, we have a strategy,” Zimmerman said. “We scouted the other team a little bit so we knew what they wanted to do against us. We just manipulated our defense and our offense in order to find a way to beat them, and we executed everything well.”

NMU hits the road again to compete in the team’s final-road matches of the season, competing on Friday, Oct. 26 against Grand Valley State and on Saturday, Oct. 27 against Ferris State.