Sophomore defensive player Cheyenne Cecchini said the Wildcats could have done better than they did, and it was a tough weekend for the team. 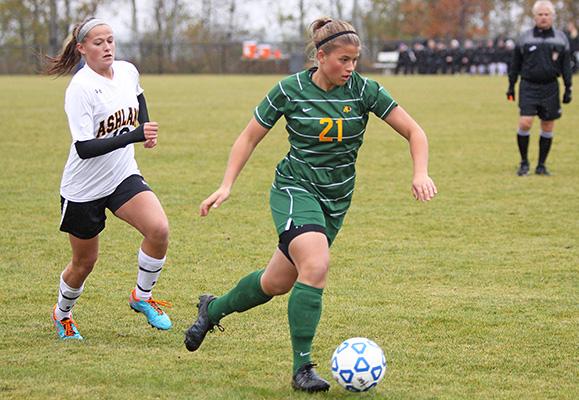 “We could have done much better,” Cecchini said. “It was a rough weekend that’s for sure. It’s always difficult going on the road and coming back with two losses when you know the team could have come away with at least one win.”

Head coach Matt Granstrand said despite the outcome of the weekend, he understands the position his team is in, and is not too dissapointed.

“We are young and beat up and so this year is and will be a challenge all the way till the end,” Granstrand said. “We are competing and playing hard and it is a good group of kids, it’s just when you have a rebuilding year and you also have upperclassmen out hurt you are going to struggle. It is not something any of us enjoy, but all we are doing is competing hard and we are going to do that through the end.”

Cecchini said the competition last weekend was very tough, but despite the fact that Grand Valley is a good team, the ’Cats should have been able to keep up with them.

The Wildcats let up in the second half, which gave the Lakers a window to the win.

“I think the key was to keep everyone positive and to believe in each other, but goal after goal against us just made things even more difficult,” Cecchini said. “As for Ferris State, they were a good team, but honestly that is one game we should have won if we played the full 90 minutes. Having any luck is just not on our side this year.”

Granstrand said Grand Valley is the best team in the country and with that in mind, he is not disappointed in the Wildcat’s level of play.

“When you play Grand Valley, you have two choices, you can come out and try to play or you can sit back and get shot at,” Grandstrand said. “We came out and tried to play and the first half we did great. The challenge is we are beat up and low on players so we run out of energy late in the game.”

The Wildcats faced 17 shots on goal from Grand Valley, nine of which were saved by Conard. Cecchini said not only is Grand Valley a good team, but the ’Cats had a few internal problems that affected the outcome of the game.

“In the second half there was a breakdown on our part,” Cecchini said. “It’s late in the season and we have injured players and we are a young team. As coach has been saying, it’s a building year for us.”

Granstrand said the ’Cats are not disheartened by their losing streak, they understand their circumstances and will continue to work hard.

“We know what is going on and we know we are beat up,” Granstrand said. “We all want to win but this team is not distraught or giving up, we are very comfortable with where we are. Motivation and hard work is not an issue for us, we are going to show up and play hard and hopefully we can make something happen this week.”

The ’Cats will finish up their regular season play next weekend with two home games.

The first matchup of the weekend will take place at 4 p.m. on Friday, Oct. 26 against Walsh University.

The Wildcats will then compete in a senior day game at 12 p.m. on Sunday, Oct. 28 against Malone University. After the game, the team will honor the four seniors.

“We are going to come out and play hard and hopefully get some success this weekend,” Granstrand said. “If not for some confidence going into next year, but for our seniors.”