For the third consecutive year, the Upper Peninsula Animal Welfare Shelter (UPAWS) has earned the “No Kill” award for an outstanding save rate, with help from NMU students.

The Michigan Pet Fund Alliance named Marquette County as one of 11 communities in the state with a save rate of at least 90 percent of its shelter animals.

There are 50 no-kill shelters, or shelters with a 90 percent save rate, in the nation. Eleven of those are in Michigan. Seven of those 11 are located in the Upper Peninsula.

According to Lareina Van Strien, the shelter’s manager, over 100 NMU students volunteer at UPAWS, which contributes considerably to its success. 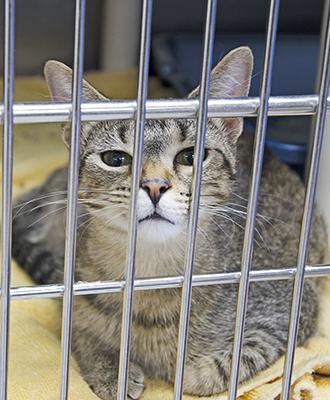 From grooming the scraggly pets, to cleaning up their “accidents,” to simply giving them some R&R, NMU student volunteers help the UPAWS to maintain its “no kill” status.

“To know that you’ve saved at least one life is remarkable, let alone as many as UPAWS has,” NMU student and volunteer Julia McLean said.

McLean served her Superior Edge internship with UPAWS where she spent several hours walking, grooming and socializing with the homeless animals.

“I know countless passionate students like myself who visit frequently and I know we’ve made a difference.” McLean said.

Beyond pet-grooming and dog-walking, the shelter provides other opportunities for students.

A variety of student majors have worked and gained experience with UPAWS including graphic arts, pre-vet, business and building trades.

Although the shelter is now one of the most acknowledged in the nation, it hasn’t always been this way.

A few years ago, the shelter had an average save rate of 40 percent. Today, the animal home boasts a 95-percent save rate.

“It used to be I never even wanted to get to know the animals that came into our shelter because you knew that over half of them would die because we failed them,” UPAWS board president Reva Laituri said.

In the last several years, however, every healthy, safe, adoptable animal has found a home, Laituri said.

The only ones that have not been saved were fatally ill, injured or had behavioral issues that made them a risk to the community.

In 2009, Laituri recalls when two NMU students took in an elderly cat with health and behavior issues, knowing full well the extra care, cost or attention that animal needed.

“We will never forget the kindness they showed that cat in providing it a loving home for the last month of its life.” Laituri said. “Those are the people that are especially near and dear to our hearts.”

Out of the 5 to 7 million companion animals that enter an animal shelter each year, 60 percent of dogs and 70 percent of cats are euthanized nationally, according to the ASPCA.

The president attributes UPAWS’ successes to not just the staff, but the entire community that supports the shelter and its mission.

“When I accepted the award on behalf of the community, I thought of those two NMU students,” Laituri said.

Laituri also praises the businesses who allow donation bins in their establishments, the volunteers who keep the website updated and transport animals and the local veterinarians who keep the animals healthy.

“If I had to be a homeless animal, I would hope it was in Marquette County,” Laituri said.