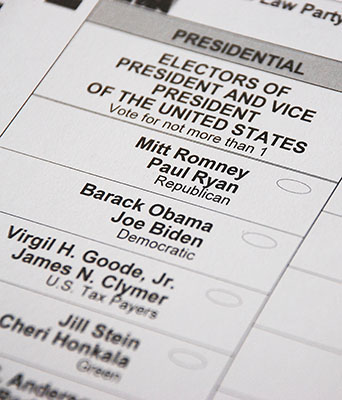 Citizens nationwide are preparing to cast their vote on Election Day, Nov. 6.

The ballot will be divided into three sections, starting with the partisan vote, followed by the non-partisan vote and concluding with the ballot proposals, according to Marquette County Clerk Peter Dishnow.

“Voters should bring a photo ID, but if they do not, they can sign a certificate on the back of the voter application, certifying their identity,” Dishnow said. “Michigan ties voter registration to the driver’s license address. If voters change their driver license address without changing their voter registration address, they may go back to the old polling place to find out they’re not registered there anymore.”

There will be poll workers who will ask if a voter wants instructions on how to vote, Dishnow said.

“Once it’s established, a voter is in the right polling place, they will be issued a ballot and enter a booth to cast their vote,” Dishnow said. “Once they are done, they feed the ballot into the tabulator which counts the vote.”

According to Tom Baldini, NMU political science professor, there are 39 items on the ballot.

“Voters should consider bringing a list of how they want to vote,” Baldini said. “They can get a sample ballot from the Secretary of State or the city clerk.”

According to Dishnow, voters can select a straight-party ticket for the partisan section, which will allow them to cast a vote for all candidates in a particular political party.

“None of these (sections) are connected, so you can vote on a single section without affecting your vote,” Dishnow said. “A straight party vote does not affect the non-partisan section.”

Voters also have the ability split their straight ticket if there is one member of their political party they disagree with, said Ruth Watry, NMU political science professor.

“In Michigan, voters can select a straight ticket and still select another candidate of another party,” Watry said. “For example, a voter could select straight Republican but fill in Stabenow, and the machine would read their vote as being for all the Republican candidates except for senate, which the voter would have chosen Stabenow.”

There are seven voting precincts in the City of Marquette. The polls will be open from 7 a.m. to 8 p.m. The busiest times of the polls are during opening, lunch and after dinner, Dishnow said.

“There was a huge number of absentee ballots this year, so it could reduce the amount of people at the polls,” Dishnow said. “I suggest voters should allow at least 20 to 30 minutes.”

According to Baldini, the deadline for an absentee ballot is 2 p.m. Saturday, Nov. 3.

“In Michigan, you have to report to your designated voter precinct on Election Day,” Baldini said. “However, you can pick up an absentee ballot at any voting location and fill out the ballot right there. They will then seal it and accept it.”

Some people may be intimidated or not care, but participation in voting is important, Baldini said.

“Five hundred and thirty-seven votes changed the vote in Florida in the 2000 election,” Baldini said. “It would have gone to Gore. It could have made a huge difference in the nation’s direction.”

According to Watry, it is a misconception that a person’s vote does not matter due to the electoral college.

“The electoral college’s votes go to the candidates and the candidates will not get the state if people don’t vote,” Watry said. “It’s not a direct vote, but it still determines who the state’s votes go toward. There are also other issues such as the State House, which will decide things such as funding for public universities, which should concern students.”

“The U.S. currently has $16.2 trillion of debt that will need to be paid off by [the 18- to 24-year-old] demographic,” Watry said. “The older generation has been spending and overspending for too long, with a big chunk of the debt accumulating in the past 10 years. We are voting on people who allow the government to spend the money as it does, which is another reason why every vote is important.”