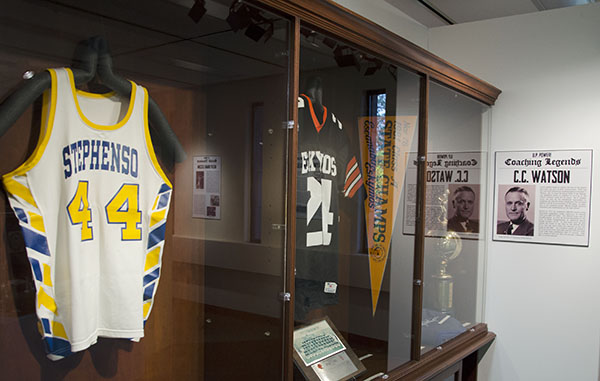 The exhibit is about high school sports in the U.P., focusing on coaches, players, teams and records.

It will be open until Saturday, March 30. Students can view the exhibit Monday through Saturday from 10 a.m. to 4 p.m. in 105 Cohodas Hall.

“We wanted to do something that was fun,” said Daniel Truckey, director of the museum. “We wanted to attract an audience that normally wouldn’t come to these exhibits, and sports…sports are a big thing in the U.P.”

The students who are native to the Upper Peninsula and those who grew up outside of the U.P. stand to learn something from this exhibit.

“Students will learn an appreciation of the quality of the athletes and teams from the U.P. and how things change,” Truckey said. “Like, how at one time, most sports were closed to women, which is not the case anymore.”

Student worker, Erin Comer, had a lot to say about why a visit to the Heritage Center is well worth the trip.

“It is history,” Comer said. “I might be a little bit biased, because I am a history major, but this exhibit is a way to show and preserve a little bit of the rich culture of the Upper Peninsula.”

Comer did research to bring this exhibit to a reality. She focused on Dickinson County, Iron Mountain, Norway, Crystal Falls, Kingsford and a few more towns in south central U.P.

Comer contacted different museums and schools throughout the U.P. asking for athletic records, information on outstanding athletes, coaches and awards.

Having never been asked for this information before, Comer had to work with both the museums and schools to gather the items she needed for the exhibit.

“The fact that they didn’t know what information to get to me told me that this was new territory, and that there was a real need for it,” Comer said.

It took a lot more work to get artifacts. She had to fill out a lot of extra forms for memorabilia.

“My personal favorite piece in the exhibit is the picture of John Payment,” Comer said. “Payment set the record for the high jump. He jumped seven feet and one inch, and he did it without assistance, in high school. The record for the Olympics is just a little over eight, I think.”

Truckey and Comer, as well as the other staff and people around the community are enthused about the exhibit and excited to see people learning more about U.P. culture.

“The Heritage Center has two purposes,” Truckey said. “The first purpose of the center is to celebrate the history and the culture of the Upper Peninsula. The second purpose is to act as a laboratory for students to learn the museum trade.”