The NMU women’s soccer team split their final weekend of the season with a loss on Friday, Oct. 26 to Walsh University (0-1) and a Senior Day win on Sunday, Oct. 28 against Malone University (7-0).

The ’Cats finished their season with a record of 3-10 in the GLIAC and 4-13 overall.

Sophomore defensive player Cheyenne Cecchini said the game on Friday was a good example of what most of the season had been like. 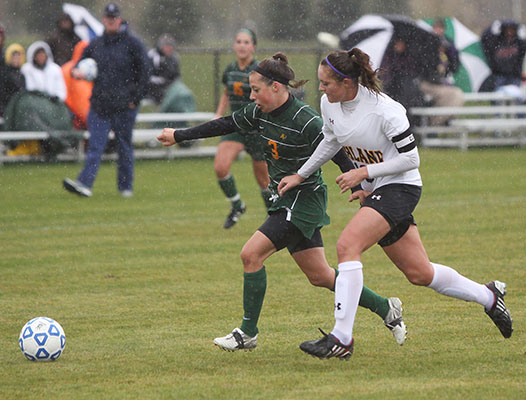 “Friday was one of those games again,” Cecchini said. “We dominated and just got unlucky as usual.”

Head coach Matt Granstrand said he thought the team could have won both games, but he is still happy with his team’s performance.

“I am proud of the girls to get the final win of the season,” Granstrand said.

Freshman goalkeeper Shelby Conard had three saves in the game on Friday, and the Wildcats had 11 total shots, six of which were saved by the Walsh goalie.

On Sunday, the ’Cats dominated on shots with 27 total.

The Wildcats’ first goal was scored by the Sellers sisters, sophomore forward Tevun with the goal and senior midfielder Brekelle with an assist.

The ’Cats kept the shots firing away with two more goals in the first half. Forward Amelia Johnson scored an unassisted goal and sophomore defensive player Taylor Smith scored the third goal unassisted as well.

The second half was busy for the ’Cats as they took the win with four more goals.

The team scored three goals in three minutes starting off with a goal by sophomore midfielder Kim Rietveld assisted by Brekelle Sellers.

Tevun Sellers followed suit and scored on a rebound shot by Rietveld. One minute later, Brekelle Sellers blasted a shot from 35 yards to make it 6-0 for the ’Cats.

Cecchini said she enjoyed the game on Sunday, and the outcome showed the team’s enthusiasm.

“Senior day was fun,” Cecchini said. “We came out wanting to win and I think we did our job.”

Four seniors were honored prior to the game on Sunday. Johnson, Sellers, defensive player Becky Fiorenza and midfielder Jenna Peplinski. Granstrand said the seniors are a good and classy group of athletes who have had wonderful careers at NMU.

“They made it fun this year,” Granstrand said. “We knew it was going to be a tough one, but they were always there keeping it positive and working hard on getting better. That is a credit to them because they didn’t need to, it could have been just a frustrating year but they helped us keep growing.”

Cecchini said she is sad to see the seniors go and that each of them contributed to a crucial part of the game.

“I love them all,” Cecchini said. “Jenna would come off the bench and just be awesome in the middle, Becky has been there the whole time-heck she is married and she is still playing! Emmy, you expect everything from her and she has always given her all. As for Brekelle, she has the passion, and you can always see it.”

Despite the teams losing record, the Wildcats never let up during the season.

Cecchini said most of the team’s positive attitude comes from their love for the game and each other.

“We are a family and we don’t ever want to let each other down,” Cecchini said. “If we want things to work out, we have to stick together through the hard times. That is what a family does and that is how we get through it.”

In regards to the season as a whole, Granstrand said he attributes some of the losses to the general health of the team.

“I think it is what it is, if we were healthy, I think our record would have been better,” Granstrand said. “I think we competed the best we could every game and I think we will be back up to where we normally are once we are all healthy.”

Cecchini said this year should be considered a building year but all in all she was happy with the season.

“We would have liked to win more games, but I think since we were all positive and stuck together, you can’t ask for more in a tough season like that,” Cecchini said.

Cecchini said as a player, she learned the true meaning of teamwork through this season.

“Don’t single anyone out but yourself,” Cecchini said. “It comes down to you and playing for your team. All you can look at is did you give your all, you can’t be pointing fingers at anyone without evaluating yourself first.”