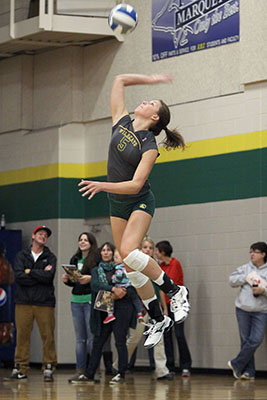 The NMU volleyball team continued on the road to Houghton to face-off against the Michigan Tech Huskies following a split weekend, defeating them for the second time this season.

The Wildcats remained in power for the extent of the game against the Huskies on Tuesday, Oct. 30, winning 3-0, with scores of 25-23, 25-13 and 25-21. Before the game, NMU head coach Dominic Yoder said the team would be focusing on a few factors in the rivalry match-up.

“We planned a quick practice on Monday to build on the weekend’s success,” Yoder said. “We will try to keep it on MTU with pressure, good serving and our side-outs.”

Yoder said the team applied the necessary pressure both nights in the right places to come out like they did.

“We played hard,” Yoder said. “We created breaks for ourselves and took advantage of them. We kept pressure on GVSU from start to finish. Lina Lopes, Sarah Hamilton and Jasmine Calhoun all had top performances.”

On Tuesday, the ’Cats earned a .300 attack percentage with 48 total match kills. With the victory, NMU moves up to 9-5 in the GLIAC and 17-10 overall. Junior leftside hitter Kalli Herron led the Wildcats’ offense with 13 kills, followed by freshman left-side Lisa Studnicka with 11. Junior middle-hitter Sarah Hamilton contributed nine more kills for the team, while senior middlehitter Jasmine Calhoun earned six.

Hamilton said the ’Cats went into the game focusing on a key aspect: pressure.

“We fought extremely hard,” Hamilton said. “We knew going into the game that they were the number two team in the conference and that pressure was on them. We all worked as a team and executed the game plan. Both of the weekend’s games were extremely fun to play, and I love that we left everything on the court.”

The ’Cats’ defense put up a fight on the court, with Zimmerman tallying 10 digs and Studnicka nine. Harley assisted the offense with 32 assists while earning eight digs of her own.

NMU started the weekend on Friday with their third win in a row, beating the Lakers with a .200 attacking percentage and 54 total kills. Lopes led the offense with a match-high 19 kills, making that the highest kill count in the last three games. Studnicka was right behind her with 11 kills, while Hamilton contributed 10.

Hamilton said the performance against Grand Valley helped to pump up the team for the games to come.

“The Grand Valley game was amazing,” Hamilton said. “It was a close five-set game, and I was very happy that none of us ever gave up. I saw a fight in us that wouldn’t allow us to lose, and it was one of the best feeling games of the year.”

The NMU defensive line held together with Zimmerman earning 17 digs. Junior defensive specialist Suzanne Solin contributed 15 digs, followed by Lopes and Harley with 12 each. Harley also set up the defense with 52 assists.

Fans can catch their volleyball ’Cats in action as they face-off at 5 p.m. on Friday, Nov. 2 against Hillsdale College. NMU will play again at 4 p.m. on Saturday, Nov. 3 against Northwood University.