According to the Center for Disease Control and Prevention (CDC), around 20 to 25 percent of women reported experiencing an attempted or a completed rape in college.

The Health Promotion Office (HPO) on campus offers support and referral for anyone that is a victim of sexual and domestic violence or is a friend of a victim. 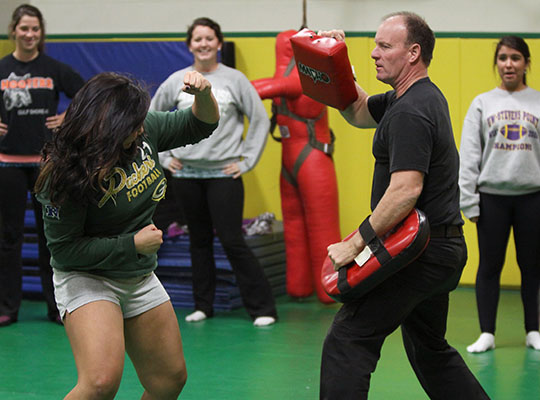 HPO health specialists give presentations about sexual and domestic assault in first year experience classes, a university orientation class for first year students at NMU. Due to sexual assault being more common than domestic violence in college, the HPO makes it more of a priority to cover during presentations.

“In the class presentations, we want to reach out to the victims of the crimes, and especially friends of the victims,” said Lenny Shible, health specialist for HPO. “Those victims that choose to come forward to their friends have given them an opportunity to help them.”

Many survivors of the crime tend to be too scared or uncomfortable to come out publicly with their story, Shible said.

According to Shible, the chances that a victim will seek help or counseling is very slim, so if someone is a friend of a victim, they are asked to take advantage of the situation once you are aware.

The university offers counseling located on the top floor of Hedgcock in the Student Service Center, for anyone that wishes to discuss their problems with counselors. They also offer emergency appointments as well for students who need immediate help after experiencing something traumatic, such as sexual assault.

“During our presentations, we make sure to tell our students that only the victims can make the appointment for counseling, not a friend,” Shible said.

Friends are encouraged to be with them when making the appointment, as well as staying with them to make sure they actually go see the counselor. All counseling is private and confidential, according to Shible.

To become more knowledgeable on ways to avoid and protect yourself from sexual assault, NMU offers Rape/Aggression Defense (RAD) classes every semester. Lt. Don Peterman started this course in 2001, and now is one of the three police officers along with two female instructors that teach the class.

“We cover the four risks as well as ways you can avoid dangerous situations,” Peterman said, “Along with different self-defense techniques we have them practice on the instructors.”

The course is designed around realistic and dynamic hands-on training for the student with certified instructors.

“Students will benefit greatly from this class, and will better understand the definition of sexual assault and what steps to take if they are a victim,” Peterman said. “I would make this class one of my top choices to take at Northern.”

Along with counseling services on campus, Marquette has a Women’s Center that deals specifically with survivors of sexual and domestic violence.

“Although it is called ‘Women’s Center,’ our services are available for men and children as well,” said Kelly Laakso, sexual assault victims advocate of the Women’s Center.

Another community based service providing support for victims is Harbor House, which is an affiliate with the Women’s Center and houses survivors of domestic and sexual violence and their children.

“We also provide information for friends of victims on ways to help their friend through it patiently,” Laakso said.

Some of the services the Women’s Center provides are individual counseling, support groups and court advocacy. In addition, a 24-hour crisis hotline is available for anyone that needs to talk with advocates of the Women’s Center. They are open Monday through Friday from 8 a.m. to 5 p.m.

The HPO office is located on the first floor of the University Center and is open from 8 a.m. to 5 p.m. Call (906) 227-1455 to receive information and referrals for sexual assault concerns.