Monday night’s ASNMU meeting offered little help regarding the organizations current impeachment status of their president, despite pleas of many students to find a way to fix it.

This week’s meeting brought more general assembly members and members of the public (mostly students) than any of their past meetings.
Many students came to speak for the public comment portion of the meeting.

“We need to drop our egos and get past this because guess what? The students elected him,” one student said.

“I’m not saying you did anything wrong, but at this point, for the better of campus, Ben should resign,” another student said. 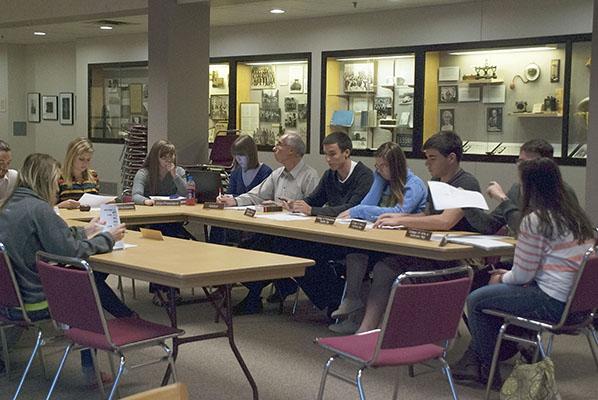 ASNMU President Ben Stanley’s lawyer, Andrew P. Jones, also spoke out urging the board that Stanley’s intentions are only to serve the students that elected him and that Ben had no bitter feelings towards any current or past ASNMU members.

ASNMU Vice President Kelsey Hayes further expressed her frustration with the gridlock her organization has fallen into. She suggested a recall election, where an official can be voted out before the end of their term, and said she would like to see it initiated that night and further explained how the recall election could be executed.

According to Hayes, if the recall is demanded or initiated, those who proposed it have 90 days to get it signed. They would need 25 percent of the votes that Stanley originally received when he was voted in (110 votes) in order for Stanley to be removed. It is traditional that a successor would run on this same ballot.

“If there is a demand for it, which I do see a demand for it, submit a basis for the recall next meeting in writing to Abby [chairwoman of the assembly],” Hayes said. “Why wait to vote in April when we could vote right now?”

College of arts and sciences representative Alex Nye and off-campus representative Rachael Fisher thought Hayes’ plan for a recall election would be impractical and wanted to wait for the April election to occur.

“My email inbox is full of students telling me not to give up, not to step down, so I can’t do that,” Stanley said. “There are other ways to get around this, such as working out our personal differences. The only thing bringing ASNMU down is this current impeachment.”

The meeting then took aim at the Students Association of Michigan (SAM) conferences in a presentation by College of Arts and Sciences Representative Troy Morris. He displayed a budget to get ASNMU involved in these conferences and received full support from the general assembly and executive board.

The general assembly then turned matters toward enriching student’s college experience at NMU.

Off-campus representative Luke Wooly spoke out with plans of ceasing the “drama,” getting events planned at NMU that students could be proud of and by which others would recognize NMU.

“We need to do different events, help get funding for other organizations,” Wooly said. “Look at Michigan Tech, they celebrate where it’s freezing by building ice sculptures. We need something like that.”

His idea was followed with a wide agreement from his colleagues.

After, more discussion of the impeachment took place, but seeing no conclusion the meeting was soon adjourned thereafter.