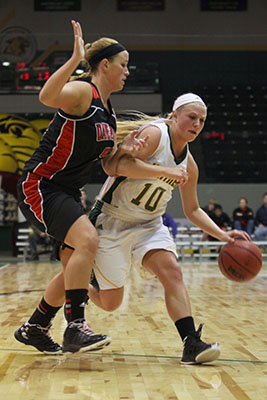 The NMU women’s basketball team got back to the hardwood as they kicked off their 2012-13 season with a 77-67 loss to Davenport University on Saturday, Nov. 10 at home.

The ’Cats fell behind 35-29 at halftime but kept the game within reach throughout the second half, never trailing by more than 10 points and getting within one point of tying the Panthers midway through the period.

Head coach Troy Mattson said he was impressed with the way the Wildcats played despite the home opening loss.

“Let’s give Davenport all the credit in the world, that’s a good basketball team,” Mattson said. “They have incredible quickness out of the guards, they have good post players, they have good athletes and they have people who can make three’s.”

The ’Cats struggled in the first half as Davenport used their full court press to force 17 NMU turnovers.

Sophomore guard Lauren Gruber said the Panthers’ quickness was a challenge for the Wildcats out of the gates.

“In the first half it created a few more turnovers than we would’ve liked,” Gruber said. “It got them some momentum and then they started going with it and then we were trying to bounce back from it rather than keeping it even the whole way through.”

At halftime Mattson made an adjustment against the Davenport press which helped the Wildcats get into their offense.

“We made a change at halftime and it worked pretty well,” Mattson said. “It took some pressure off our guards because it was a nightmare there for awhile.”

The adjustment worked as the ’Cats only turned the ball over eight times in the second half and increased their assists from six in the first half to 11 in the second.

“I think in the first half we were a little frazzled and in the second half we came out and were just trying to come at them really hard and intense and keep our confidence and attack,” Gruber said.

Gruber was a big part of that second half attack as she poured in 14 of her game high 26 points in the period.

Mattson said the ’Cats picked up their attack in the second half but the Panthers hit the big shots down the stretch.

NMU pulled the game within six (71-65) with 2:28 left after sophomore forward Maria Almquist hit a 3-pointer.

That was as close as the ’Cats got within the final minutes as Davenport was able to sink their free throws and close the door on a comeback.

Mattson was impressed with the intensity in the first game and said that lack of effort wasn’t a factor in the ’Cats loss.

“They came into a pretty tough environment, we had a pretty good crowd here tonight and they outplayed us,” Mattson said. “It wasn’t because of lack of effort on our part; it was that they just outplayed us. For that type of the game and that intensity for the first game of the year you can’t go away unhappy with what happened out there.”

The Wildcats are back at home for their next game at 5:30 p.m. Tuesday, Nov. 20 as they host Finlandia at The Berry Events Center.