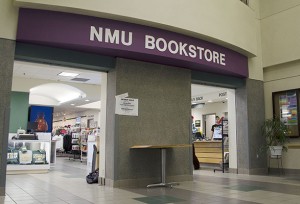 The Auxiliary Services Office on campus is taking a look into the university’s bookstore to see how best it can serve the needs of Northern’s students.

The NMU Bookstore, located on the bottom floor of the University Center, is currently ran by the school as a self-operation store.

As of right now, the bookstore does not run under a contract that will expire, but Auxiliary Services wants to make sure that students have access to the most current trends in college bookstores.

“The bottom line is NMU students are our customers,” said Tom Helgren, director of Auxiliary Services. “It doesn’t matter if it’s a self-operation or a contract [store].”

In order to make sure that Northern’s bookstore is working at its peak for the students, Auxiliary Services has sent out several requests for proposals to other outside companies to see what they could offer Northern, according to Helgren.

“The industry has undergone significant changes in the past four to five years, moving to used and rental book programs first, then to ebooks,” said Arthur Gischia, senior associate vice president for administration. “Our operation has changed along with these trends, so we wanted to obtain proposals to see if there were any advantages to considering an alternate approach.”

Some of the biggest competitors in regards to campus bookstores include Barnes & Noble, Follett and Neebo.

According to Gischia, some of the different aspects they are examining when looking at each company include new and used book programs, e-commerce opportunities, store layout, operating plans, interface with faculty, staff and students, employees and financial contribution to the university.

A change in staffing could also occur if a contract provider would take over. The new provider would have control over how the new store would be managed, similar to how Wells Fargo operates on campus.

Once they have considered each part of a company’s proposal, Auxiliary Services would then compare the companies involved to each other and also to industry standards to see which would best serve NMU’s students, Gischia said.

“There are many factors that would need to be carefully considered prior to making such a decision and we are deliberately moving through that process,” Gischia said. “There is no self-imposed deadline, but a final recommendation is expected by the end of the year.”

Although there may be changes in who is running the bookstore, students should not see a drastic change in textbook materials that are offered.

According to Helgren, the faculty has control over which books are ordered, including which format they are available in, such as whether or not ebooks will be an option for students.

“Whether or not we move to a contract provider, changes in bookstore layout and size have been discussed for the past couple years,” Gischia said. “Some of those cosmetic changes could occur as soon as Summer 2013; paint, carpet replacement and merchandising changes for example.”

Through this entire process, the primary goal is to be proactive and look for the best solutions available for students.

“The market is changing at a rapid pace,” Gischia said. “So additional technological tools to better equip students with up-to-date book pricing comparison tools is another new feature that the NMU Bookstore team is planning for.”