The investigation of the drowning of an NMU women’s soccer team player on Friday, Nov. 30 in the PEIF pool still continues, as NMU Public Safety tries to put a timeline together.

Arianna Alioto, 18, from Columbia, Mo. was found in the PEIF lap pool at 5:35 p.m. Friday when a girl working out in the area that overlooks the pool spotted Alioto’s body and reported it to the information desk, said director of Public Safety Michael Bath during a press conference held Monday, Dec. 3.

The staff then entered the pool area to find Alioto’s body in the pool and unresponsive, and called 911. Alioto was taken to Marquette General Hospital where she was pronounced dead by the hospital staff. 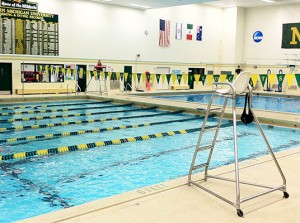 “We are going through a grieving process,” Bath said. “This type of investigation is going to take a little bit more time than normal because the individuals that we are interviewing are obviously dealing with the stress of the situation.”

The soccer team had been working out in the pool prior to Alioto’s drowning and the pool was closed to the public during this time.

According to Bath, their practice had ended shortly before 5 p.m. There was a lifeguard present during the team workout.

Public Safety is still investigating why there was no lifeguard present while Alioto was in the pool alone.

“There was no trauma to the body on the initial observations,” Bath said.

Whether or not Alioto had previous medical conditions is still being investigated, Bath said.

“[The lifeguards] had been on our staff working for us for a couple of years,” said athletic director Forrest Karr. “Actually the head lifeguard and the lifeguard who trains other lifeguards [were on duty].”

According to Karr, the lifeguard on duty was a student.

“We are in the process of reevaluating our whole [surveillance] video program on campus,” Bath said. “But all we have in that [pool] area is livetime video.”

According to Bath, an autopsy was being conducted Monday, Dec. 3 and results won’t be completed for two to four weeks.The pool was closed Saturday and reopened to the public Sunday.

Students were encouraged to wear purple to honor Alioto throughout the week and to Tuesday, Dec. 4 NMU men’s hockey game against Michigan Tech. Purple was Alioto’s favorite color.

A crowd of about 200 also came together Saturday evening, Dec. 1 in the Magers Hall courtyard, where Alioto lived, to participate in a candlelight vigil for Alioto.

Alioto was redshirted while recovering from a previous injury.

Alioto’s funeral arrangements are being handled by the Memorial Funeral Home and Cemetery of Columbia, Mo. Visitation will take place from 4 to 7 p.m. Friday, Dec. 7. A memorial service will be held at 10 a.m. on Saturday, Dec. 8 at the First Christian Church of Columbia, Mo.

Support counseling will be provided to team members, coaches and students or administrators by NMU counseling services for those who need it.

“This is a very difficult time on campus and a very tragic situation,” said NMU President David Haynes.