As a senior, Alzaga said it is hard to walk away from something you have been a part of for so long but they are ready to go out with a bang in this upcoming GLIAC meet. 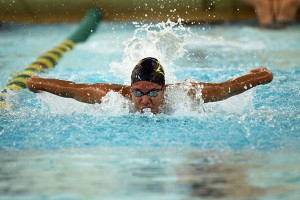 “I feel like there is so many things to remember,” Alzaga said. “Just meeting new people and meeting those friends that will be forever, is amazing.”

The ’Cats will be looking to make a splash on Feb. 6, in Canton, Ohio as they prepare to hit the road to the GLIAC Championship later this season.

Although it was a competition between teammates, the goal of this weekend’s swimming and diving meet was to prepare for the upcoming GLIAC conference championship.

The NMU swimming and diving team competed in the PEIF pool against their own teammates for a friendly, yet competitive meet that set pool records along the way for the ’Cats.

On Saturday, Jan. 19, the team had a meet to see which Wildcat competitors were ready for the GLIAC Championship and who needed to improve. I

t was also a chance for the team to learn from each other before the GLIAC Conference Championship arrives on Feb. 6.

The team’s seniors were honored at this event for their help in guiding and leading the ’Cats swimming and diving team this year. Captain Gabby Alzaga, one of the seniors honored, said she thought the team improved in some aspects.

“Since freshman, every year we just got better and better,” Alzaga said. “This year I am just so excited to see how they swim in conference because we’re so ready to swim fast and do amazing.”

Other seniors Olga Budiansky and Lauren Cockels were also honored for their hard work and dedication to the team.

The ’Cats senior group has had much support from their underclassmen throughout the season as the younger teammates showed their talent at the meet.

The team did not take the meet lightly, and the ’Cats had swimmers that broke both school and pool records.

Freshman Crystal Bennet was able to show her skills Saturday against some of the upperclassmen, winning several races.

There were 14 events held at Saturday’s meet. Support was shown in the stands by family, friends and NMU students were there to cheer on their classmates.

While the meet was about highlighting the senior’s success, some of the underclassman showed off their skills by winning a few races of their own.

“If you’re asking me, we are ready as a team,” Budiansky said “We don’t need to prepare anymore for anything. We are ready.”

The ’Cats will be looking for leadership on all levels during their conference meets.

Alzaga said she is excited about the team’s opportunity to swim in the GLIAC Championship and feels confident about the Wildcats’ chances.

“We just need to keep focusing on training and on other things we might not be doing as well with,” Alzaga said. “I think we’re all ready.”